The Italian attacked after the Cauberg and rode the final 1.7 km solo to take her first WorldTour win. A select group of seven crested the top of the Cauberg and a moment of hesitation opened the door to a perfectly timed attack by Marta Cavalli. With the move, Cavalli was able to ride solo to the finish of the Amstel Gold Race and secure her first WorldTour victory, and the first team win for FDJ Nouvelle-Aquitaine Futuroscope this season.

A few seconds behind Cavalli, Demi Vollering (SD Worx) and Liane Lippert (Team DSM) out-sprinted the rest of their chasing group to take second and third.

The action really started to pick up once the race entered the circuits outside of Valkenburg. At one point a group containing a few of the pre-race favourites including Ellen van Dijk (Trek-Segafredo), Chantal van den Broek-Blaak and her teammate Vollering, and Annemiek van Vleuten (Movistar) found themselves half a minute off the front. With so many heavy hitters the breakaway group was unable to cooperate and the peloton caught up to them.

A break of three had some daylight going into the final lap but they were caught once the peloton hit the Bemelerberg for the last time. SD Worx was particularly keen to bring the race back together before the final ascent of the Cauberg.

Attacks flew on and after the Bemelerberg, but only Victorie Guilman (FDJ Nouvelle-Aquitaine Futuroscope) was able to get any kind of distance ahead of the final climb. The lone leader was brought back on the fast descent into the base of the Cauberg. Once on the final climb attacks flew and the pace of Van Vleuten forced the separation of seven top riders.

Over the top of the Cauberg, the leaders spread themselves across the road to assess the situation and the slowing of pace allowed Cavalli to attack from the last wheel. The Italian immediately got a gap, with Vollering looking to her teammate Ashleigh Moolman Pasio to chase. Moolman Pasio was the only rider to hit the wind in the closing kilometre and a half, and in the end, Cavalli took the win comfortably. 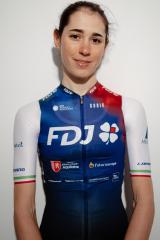