Michał Kwiatkowski (Ineos Grenadiers) wins 2022 Amstel Gold Race, which finishes in a photo finish for the second year in a row.

Race organisers awarded victory to Benoit Cosnefroy before double-checking the photo finish, and finding Kwiatkowski had got it. Michał Kwiatkowski (Ineos Grenadiers) won his second Amstel Gold Race by a few centimetres with a well-timed lunge across the line. He was kept waiting for confirmation though, as the organisers mis-identified the winner in the photo finish that ended the race – for the second consecutive year – giving Benoit Cosnefroy (AG2R-Citroën) a few minutes to celebrate a victory that was not his.

The Ineos Grenadiers took full control of the race as soon as the early breakaway was hauled back, Ben Turner – one of their most lucrative signings of the season so far – setting a ferocious pace as Amstel Gold entered the final act.

The moment the towering young Brit peeled off the front, Kwiatkowski took over and pushed on up the Keutenberg, forcing the definitive selection of eleven riders. The Pole had teammate Tom Pidcock on his wheel, with Tiesj Benoot (Jumbo-Visma), Kasper Asgreen (Quick-Step Alpha Vinyl) and Cosnefroy fastest to react. Mathieu van der Poel (Alpecin-Fenix) also made the cut despite appearing to lose touch near the top of the climb.

In the last 30 km of the race, Kwiatkowski was one of the more active riders, repeatedly testing his fellow attackers who would not work together. The group had a buffer of about 25 seconds going into the final lap and, bored of all the stalling, Kwiatkowski jumped clear as the bell rang. Cosnefroy was the only one to bridge the gap, while the rest of the group cancelled themselves out with all the elbow flicking and staring down.

The Frenchman lead out the final sprint, Kwiatkowski tucked into the wheel. The 2015 winner came alongside Cosnefroy very late and the pair crossed the line together.

The scenes beyond the finish line looked very familiar as Kwiatkowski and Cosnefroy came to a stop metres from one another, waiting for the result. After a few minutes – and importantly, before the photo finish had been shown – the Frenchman was announced as the winner and Kwiatkowski folded into himself, clearly devastated.

However, the photo finish showed clearly that the officials were very, very wrong, and the result was turned over to the Ineos Grenadier, finally bringing to an end a 569-day drought for the former World Champion. The extended footage even depicted Cosnefroy banging his bars in frustration as Kwiatkowski’s momentum propelled him forward. His instinct had been correct on the line.

Benoot had attacked the chase group in the final straight to ensure third place and a well-earned drink on the podium. 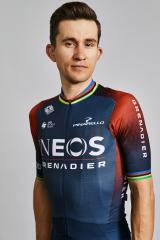 Michał Kwiatkowski (Ineos Grenadiers) wins 2022 Amstel Gold Race, which finishes in a photo finish for the second year in a row.