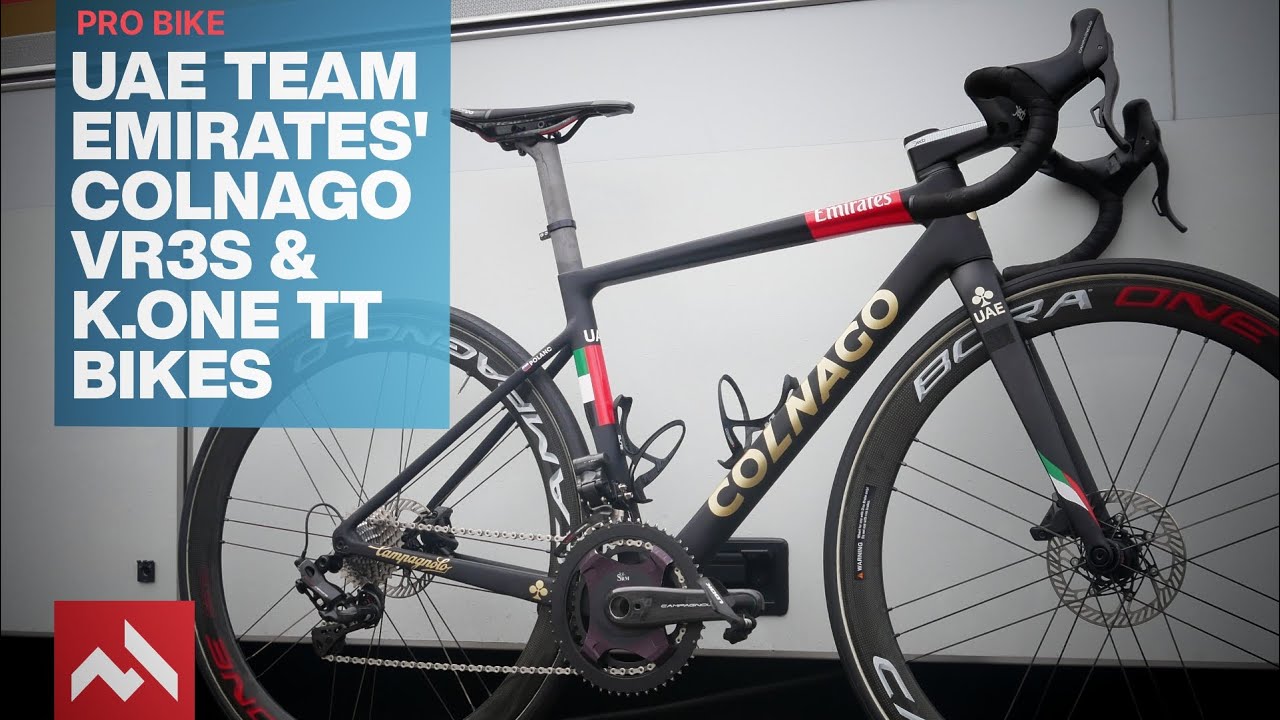 Back in the pits, we get our grubby mitts on two of UAE-Team Emirates' Colnago bikes. One for going fast, the other for going even faster.

Here we go again: another team bike check from the pits, and it’s another double bike bill! This time, UAE-Team Emirates kindly let me wander off with not one but two team bikes recently, just before the start of Paris-Nice – one a fast-looking time trial offering, and the other a slick-looking road bike.

You could argue that Colnago’s V3RS isn’t the Italian brand’s top-of-the range bike; there’s the C64 that slightly nudges it out for prestige in the lineup. But the V3RS is the bike of choice for the team and has been for the past few seasons. Sure the C64 is what you could call “true” old-world Colnago, but the V3Rs is their all-out race bike. Light, stiff and built for the demands of a WorldTour team: no tube-to-tube construction here!

I was lucky enough to get a few moments to snap away at Jan Polanc’s team bike. OK, I’ll be honest, it was his spare bike – when I turned up, he was rudely out for a spin on his main bike, so the spare had to do. But what a spare! One that clearly hadn’t just been sat on a car roof waiting for action, but one that had seen more than its fair share of race miles.

It’s an all-Italian affair – 12-speed Super Record EPS groupset from Campagnolo, Deda one-piece bar and stem, tubulars from Pirelli, and even down to the Elite cages and Prologo saddle. There was pretty much nothing on the bike that hadn’t either been designed or made in Italy.

As for the time trial bike, well if you’re a fan of rim brakes, I’m sure you’re well aware that time trial bikes seem to be the last safe haven for this technology. A place where good old fashioned rim brakes still slow the pros down (when needed). Yes, sure, there are plenty of disc brake TT bikes in use, but there are still plenty of WorldTour teams blasting about on rim brakes: BikeExchange with the Giant Trinity Advanced Pro, Ineos with the Pinarello Bolide, and UAE-Team Emirates with the Colnago K.One. But for how long?

The K.One that I managed to get my grubby mitts on for 10 minutes of filming belongs to João Almeida, the designated team leader for the race where I filmed this (Paris-Nice). You’d think with a team budget that sits somewhere in the region of €30 million, and as a team leader, he’d have every conceivable piece of new kit at his disposal. Well, you’d be wrong. Though fancy for most, 11-speed Campagnolo Super Record EPS stands out as one of the “downgrades” on his bike. Where is the 12-speed?

For a full dive into what the team is using, please press play on the video above, and be sure to check out our YouTube channel: now we’re allowed back in the pits at races, there will be more team bike checks coming your way.