Ineos Grenadiers are rewarded with a Monumental Paris-Roubaix victory as Dylan van Baarle goes solo with 19 km to go. Dylan van Baarle took an emphatic solo victory at a dusty Paris-Roubaix, the fastest edition in history, rewarding his immensely strong Ineos Grenadiers team which went all-in from the very first hour of the race.

The action started unusually early, with a full quota of Ineos Grenadiers taking advantage of the wind to split the race, and close down the short-lived three-man breakaway, less than 40 km into the 257.2 km Monument. Many of the biggest favourites had been hovering near the back of the peloton during this typically quiet phase so were caught out, including Mathieu van der Poel (Alpecin-Fenix), Wout van Aert (Jumbo-Visma), Stefan Küng (Groupama-FDJ), Kasper Asgreen (Quick-Step Alpha Vinyl) and last year’s runner-up Florian Vermeersch (Lotto Soudal).

The gap between the two halves of the peloton exceeded 1:20 in the 50 km that followed, but with so much of the race left, it wasn’t the disaster it might have been. A swathe of punctures, mechanicals and a massive crash conspired to bring an end to the windswept drama, and after the Ineos Grenadiers lit the matches early, it was Quick-Step Alpha Vinyl who initiated the first decisive move.

A small elite chase group emerged from the dust after the Arenberg forest, including Van der Poel, Küng, Dylan Van Baarle (Ineos Grenadiers), Yves Lampaert (Quick-Step Alpha Vinyl) and Van Aert, who had overcome one of many mechanicals to stay in touch.

Only Mohorič and Devriendt could stay the course from the attackers, while in the group that chased them down, Van Baarle, Lampaert, Van Aert and Küng proved the sharpest.

Just inside 20 km to go, Van Baarle broke clear off the front, and five kilometres later, Lampaert and Mohorič found themselves 20 seconds behind, Van Aert, Küng and Devriendt just under a minute back, and Van der Poel in purgatory over a minute from the leader.

Van Baarle’s advantage was only going in one direction as he rode towards Roubaix. There was shock in the chase behind as Lampaert hit a spectator leaning into the penultimate sector, knocking him to the ground and off a possible podium, and Mohorič was caught by the powerful Van Aert group moments later. But with a gap of 1:15 with 5 km to go, only disaster would stop the Ineos Grenadiers rider from taking the biggest win of his career. 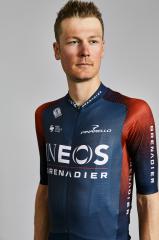