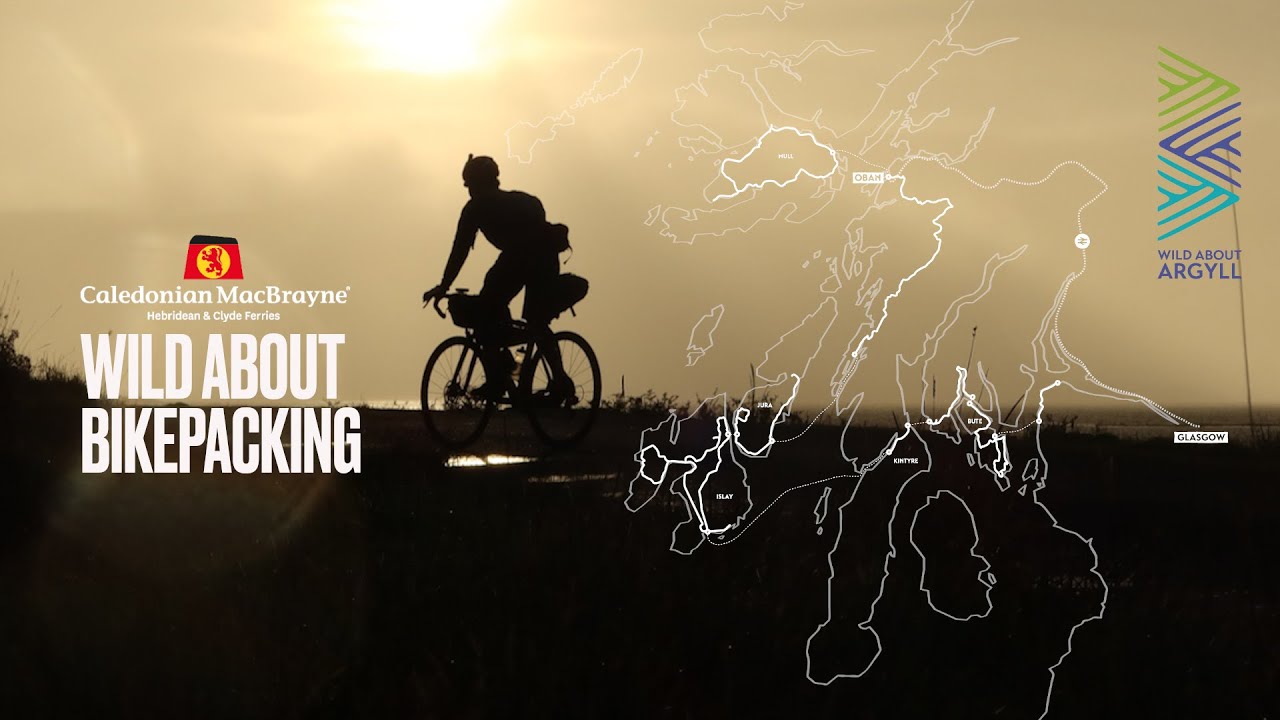 If you're in the market for a cycling adventure (and you don't mind a bit of rain), the Inner Hebrides has plenty to offer.

If you’ve spent any time at CyclingTips you would be familiar with Markus Stitz and the bikepacking adventures he writes and makes videos about. Markus’s latest trip took him to the west of Scotland, to the islands of the Argyll region, where he spent several days island-hopping by ferry, riding quiet gravel roads, and exploring a remote and beautiful part of the world.

You can watch Markus’s video from the trip above and read on below for his reflections on and photos from the ride.

Wet. Or more accurately, very wet. That best describes the state of the seat in the small ferry terminal in Craignure which I leave behind once I push my bike towards the MV ‘Isle of Mull’ ferry. The friendly staff point me in the direction of a place where I can tie up my bike, while my mind is totally fixated on a hot coffee and a piece of carrot cake.

After a fabulously sunny first day on a new trip to map another bikepacking route in Argyll, the weather today, on the second day, hasn’t been friendly at all. It has tested my resilience. My beanie is still soaked from this morning’s heavy rain, in which I tried to reach MacCulloch’s Fossil Tree on the south coast of the Isle of Mull. High tide and turning winds make it impossible to reach the geological wonder, but wandering amongst wild goats and seeing big waves crashing into the rugged coast make the three-hour hike before breakfast still worthwhile.

After swapping the covering for my bike helmet I move the wet beanie into a plastic bag. With every ray of sunshine it will come out to dry, before hiding again in the bag for the next downpour.

I spent the last two hours warming up in the small waiting room. Finally I have regained the feeling and strength in my lower right arm and hand, which I lost in the morning. In the adverse conditions my hands turned numb first, and then one of my arms followed suit. For hours I struggled to swap gears properly, and couldn’t hold the camera either.

And although Argyll has shown me its best and worst side in less than a day, this can’t dampen my fascination for this part of Scotland. For practical reasons you’ll often only see the good weather captured on film, and seldom the challenging conditions like today. With more than 20 mm of rain forecast, every single piece of my electronic equipment is wrapped up and stowed away securely in my bags. I am glad that I have booked a private room in a hostel in Oban to dry my gear.

In the few moments when the rain eventually stops, I get the small tripod out and use the most waterproof camera to document my journey. Today the ratio of stopping and riding has largely been in favour of the latter.

When I sit in my tent the next evening, pitched somewhere close to the road on the Isle of Jura, I understand why I still love these journeys in this part of Scotland. As wet as Argyll might be, its natural beauty, the friendliness of the people, and the history along the route are outstanding. I have travelled through many countries, spent a year cycling the world on a single-speed bike, but this is probably the place I have returned to the most.

I grab my phone, search for ‘The KLF’ in my music library, and select ‘Build a Fire’. While I watch the water in my pasta pot boil and remove the silver foil from the plastic wine glass, I listen to Bill Drummond and Jimmy Cauty’s music. After years of making plans, scrapping them again, then making new plans, I have finally arrived on the Isle of Jura.

My tent is pitched next to a small shelter; built within are a few shelves stacked with plastic boxes. The boxes hold the mail for the cottages further down the track, on which sturdy Highland men once drove their cattle through the thinnest part of the island. I use the small shed to hide from the ferocious winds that blow across the Sound of Jura, one of the most treacherous straits in Scotland, with strong tidal currents and the famous Corryvreckan whirlpool.

This isn’t a five-star hotel, but my camp for the night nevertheless feels luxurious. While I watch the clouds moving fast through the dark skies, I can hear a small stream running close to my patch and enjoy the tranquillity. It isn’t just my fascination for the peace and warmness of the Scottish islands that got me here eventually. This journey takes me back into my life before I spent hours on the bike. ‘Build a Fire’, a wonderfully chilled song from The KLF’s ‘White Room’ has long been my favourite to create a wild camping spot, but nowhere is it better suited to than on Jura.

The music from that album once heavily influenced my music choice when I worked as a DJ for over 12 years. Drummond, a Scotsman, and Cauty, co-founder of The Orb, were not only musical geniuses, they also made a fortune with their singles. After blowing large sums of that money by producing the most pompous and ridiculous music videos, they took every song off the catalogues, left the pop industry, and finally burnt the remaining £1 million from their international royalties on a small boat shed on the island in 1994.

While it sounds utterly bizarre to burn such a large amount of cash in a remote boat shed on an island, it doesn’t surprise me that Drummond and Cauty chose Jura. Having visited almost every island in Scotland now, this one certainly has a different feel to it. Running from Inverlussa in the east to Feolin Ferry in the west, the A846, probably Britain’s least-busy A-road, is the only tarmac road on the island.

From the road’s end in the east, a track leads to Barnhill, the house where George Orwell wrote ‘1984’. In the west a gravel road leads to Cnocbreac. Once a small settlement, to which almost every islander can trace back their roots, nowadays there is nothing left that indicates people living here.

Instead the island is largely populated by deer and adders, which roam the vast extents of peat bog, out of which the Paps of Jura rise like giants. Jura is composed largely of Dalradian quartzite, a hard metamorphic rock that provides the jagged surface of the Paps.

Divided into only seven estates, the island is mostly retained by a wealthy elite, with only one owner a permanent resident on Jura. While access to the famous boat shed at Ardfin is blocked off by large gates with a big fist holding a spear since the estate was sold to an Australian hedge fund manager in 2011, the rest of the island is a great adventure playground.

Two bothies offer shelter from the storms, and a 20 km gravel loop on the western side of the island is one of the best I can find for my upcoming book ‘Great British Gravel Rides’, due to be published in July 2022. It was so good that I convinced the publisher to add a bonus chapter.

While Jura is home to only one (although possibly Scotland’s most famous) distillery, neighbouring Islay packs nine distilleries into a similar landmass. The smoke from the peat that covers much of its surface, mountainous in the east and flat in the west, makes a typical Islay whisky one of the most distinct in Scotland. As on Jura, longer stretches of quiet tarmac roads mix with gravel tracks to make up most of the route of the Bikepacking Argyll’s Islands route, which spans 496 km from Oban to Gourock.

When I was approached in September 2021 to create the route, funded by CalMac – the public company that operates most of the Clyde and Hebrides ferries – I wanted to design a gravel bike journey which complements the popular Wild About Argyll Trail and takes riders to the lesser frequented islands on Scotland’s Adventure Coast. While Islay and Mull are tourism centres, Jura and Bute don’t frequently feature in Instagram posts and ‘best of’ lists.

Bute is the southernmost island on my trip and connected to the mainland by the shortest ferry journey in Scotland. Different to the other three islands, its appeal for me lies in the man-made features that I explore.

Like Lombard Street in San Francisco, Rothesay’s main attraction for cyclists is the Serpentine Road with its steep hairpin turns that test even the toughest of legs. Rothesay’s days as a tourist mecca had been counted as soon as cheap flights opened the world for Glaswegians beyond the Clyde, and a journey ‘doon the water’ today is a very different affair. And while there are parts of the town that remind me of the rougher areas of Scotland’s largest town, the friendliness, often seen as the biggest asset of many Glaswegians, is definitely matched here too.

One of the last stops on my journey takes me to Mount Stuart. It is here where the rain, which has accompanied me for most of my journey, provides the perfect excuse to linger for longer and explore the beautiful attention to detail in what was once Britain’s most expensive house. Built by the richest person of his time, the third Marquess of Bute, the fascination of Mount Stuart’s interior lies in the quality of the house’s contents and the amazingly detailed craftsmanship.

And although I have to nurse a slow puncture on my Twmpa GR 1.0 for the final part of my journey before I board the ferry to Wemyss Bay and cycle on to Gourock, it is the bike, with a frame handmade in Wales from ashwood, that matches the beauty I have encountered all along.

Soon my eight days in Argyll come to an end. Filming ‘Wild About Bikepacking’, combined with the weather conditions I encountered, made this a tough, but utterly rewarding adventure.

I enjoyed my time in a wet Argyll so much that only a few months later I returned to add another island to my experiences, this time in fabulous sunshine and blue skies. While filming on Coll, another jewel in the Inner Hebrides, I often think that it would make a great extension to the Bikepacking Argyll’s Islands Trail, or a good stopover point on your journey to the start of the Hebridean Way on Barra.

You are spoilt for choice on Scotland’s West Coast in any weather for bikepacking and gravel riding. If Scotland is your home or not too far away, hopefully the new route on the Bikepacking Scotland website and the upcoming book will only be the beginning and inspire many journeys. If time and distance are not on your side, then Bikepacking Argyll’s Islands will help you experience some of the most outstanding history, hospitality and landscapes the country has to offer.

You can watch ‘Wild About Bikepacking’ at the top of this article. More information about the Argyll Islands bikepacking route can be found at the Bikepacking Scotland website. A Komoot collection with shorter gravel routes on the Inner Hebrides (including Coll) and Bute can be found on Wild About Argyll’s Komoot profile.