A shark attack before Bahrain bite on Giro’s Mortirolo stage

Jan Hirt holds off Thymen Arensman to take the win from the break on stage 16.

When Astana-Qazaqstan hit the front as the GC group tackled the Mortirolo, the theme from Jaws might as well have started playing.

After the summit Vincenzo Nibali attacked, disc brakes screeching on the descent. Richard Carapaz (Ineos Grenadiers) and Mikel Landa (Bahrain-Victorious) set off in pursuit, the group thinned out and the likes of Domenico Pozzovivo (Intermarché-Wanty-Gobert Matériaux) and Richie Porte (Ineos Grenadiers) forced to chase back on after a respective crash and mechanical problem near the summit.

It was a warning shot of what was to come.

While the stage 16 honours were taken by Jan Hirt (Intermarché-Wanty-Gobert Matériaux) from the break, holding off a charging Thymen Arensman (DSM), it was the slow unfolding of the battle for the overall that captured the imagination on a big mountain day in the Italian Alps.

Wout Poels had got the call over the radio to fall back from the break as Bahrain-Victorious amassed on the front for the final classified climb of the Valico di Santa Cristina. Despite Pello Bilbao falling uphill, Landa was finally unleashed, taking just Jai Hindley (Bora-Hansgrohe) and the pink jersey of Richard Carapaz with him.

Buchmann, Bilbao and Pozzovivo had been dislodged, thus shoring up the shape of the top of the general classification. The white jersey João Almeida (UAE Team Emirates) had hovered near the back all day and couldn’t follow Landa’s decisive move. Yet he refused to give up on the descent into the finish, limiting his losses to only 14 seconds by the finish line. Nibali was nearly half a minute further adrift, but a good day for the Italian as he moved up the overall rankings.

The pink jersey group, which had collected Alejandro Valverde (Movistar) from the day’s break, sprinted for the four bonus seconds available on the line for third place on the stage. Hindley just pipped Carapaz, the difference between first and second overall now only three seconds, as Landa clung on.

Carapaz and Hindley now have around 40 seconds on Almeida and more than 15 more on Landa. After that is Nibali in fifth, more than two and a half minutes further back.

Hirt and Valverde move into the top 10 overall, while Hugh Carthy’s presence in the break once more helped him move in the right direction back up the general classification, his EF Education EasyPost teammate Jonathan Caicedo forced to leave the race before the start of the stage following a positive Covid-19 test. 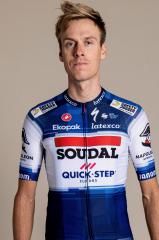