The Frenchman proves fastest in the bunch sprint in Sicily. With Mark Cavendish and Caleb Ewan distanced on the mid-stage climb, Arnaud Démare (Groupama-FDJ) took his chance and won the bunch sprint on stage 5 of the 2022 Giro d’Italia.

Alpecin-Fenix had forced the issue up the Portella Mandrazzi, first dropping Lotto-Soudal’s Ewan and then Quick-Step AlphaVinyl’s Cavendish, teammates dropping back to assist both in their chase efforts. The sprint teams remaining in the bunch kept the pace high to not allow them back in, with Quick-Step finally giving up hope of regaining contact with 60km remaining.

After the bunch negotiated a tricky final corner with 800m to go, Van der Poel lurked ominously, but the maglia ciclamino sat up with 400m to the line, Biniam Girmay trying to move up on the opposite side of the road.

With 200m to go Arnaud Démare launched, Fernando Gaviria (UAE Team Emirates) and Giacomo Nizzolo (Israel – Premier Tech) following, . The Frenchman was strong enough to hold them off, Gaviria thumping his front wheel up and down in frustration as he crossed the line in second, a golden opportunity gone begging.

For Démare, it was a sixth Giro stage victory and he’s now crossed the line first in each of his three previous Italian Grand Tour participations. The Giro aside, you have to go back to the 2018 Tour de France for his last Grand Tour stage victory that wasn’t on Italian soil. 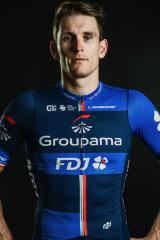