Thomas De Gendt and Lotto Soudal picked the right moment to stamp their authority on a fantastic stage in Naples. Thomas De Gendt (Lotto Soudal) took victory from the breakaway – of course – on a blockbuster stage 8 of the Giro d’Italia, his first of the year and his first Grand Tour stage since the 2019 Tour de France.

The 153 km stage took place on laps of two distinct and hilly circuits in and around Naples. It had One-day Classic written all over it, so it was no surprise that the fight was on from the gun.

Half a dozen Italian ProTeam riders inevitably led the early escape efforts, but with the breakaway in with a good chance of contesting the stage, their number swelled to around 20 riders after a few kilometres. Mathieu van der Poel (Alpecin-Fenix) was up there, along with Biniam Girmay (Intermarché-Wanty-Gobert Matériaux), Wout Poels (Bahrain-Victorious), Diego Ulissi (UAE Team Emirates), three Lotto Soudal riders including Thomas De Gendt and Harm Vanhoucke, Mauro Schmid (Quick-Step Alpha Vinyl), and Guillaume Martin (Cofidis), whose 4:06 deficit to the pink jersey ensured the elastic wouldn’t snap.

Less than 10 km had been raced before Van der Poel tired of his company and accelerated away, presumably intent on jettisoning those unwilling or unable to contribute, or tempting a small group to bridge across. But even he didn’t fancy a 140 km solo breakaway, so after about 10 km off the front, the Dutchman sat up and let a full complement of his fellow escapers join him at the head of the race, keeping his powder dry for later.

The next move – Van der Poel’s next move – came 46 km out, the stage 1 winner accelerating hard on one of the punchy climbs, drawing out Girmay, Poels and Schmid. The breakaway reformed after the rapid descent and stalled momentarily before Davide Gabburo (Bardiani CSF Faizanè) launched his own attack. Jorge Arcas (Movistar) went in pursuit and Lotto Soudal was not missing out again, this time sending De Gendt and Vanhoucke.

The gap separating the first two groups stretched to 40 seconds before the relentless pressure of Van der Poel and company finally got ride of the passengers in the chase. The Dutchman, Girmay, Schmid, Poels and Martin worked together to trim the gap, but they’d underestimated the leaders and with 20 km and two climbs to go, their advantage had gone out again.

De Gendt launched his sprint from third wheel as Vanhoucke led down the finishing straight, and the veteran Belgian had the power to finish it off, taking a well-deserved stage win for Lotto Soudal. Gabburo finished second and Arcas took a career-best third place.

It had been tense in the peloton from the start and it all came to a head as it neared the finale when Lennard Kämna (Bora-Hansgrohe) tried to catch out the pink jersey. But Juan Pedro López (Trek-Segafredo) knew what was coming and was quick to grab hold of the German’s wheel, shutting down any potential drama. In the end, the only movement in the general classification came from Guillaume Martin, whose day out saw him leapfrog up to fourth overall, 1:06 down on López and 36 seconds ahead of Simon Yates. 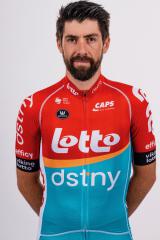