The Frenchman tightens his grip on the maglia ciclamino. Arnaud Démare sealed his third stage victory of the 2022 Giro d’Italia in a bunch sprint finish in Cuneo on stage 13.

The Frenchman profited from another exemplary lead-out from his Groupama-FDJ team, unleashed off the front in the final few hundred metres and powering to the line, proving too strong for Bahrain-Victorious’ Phil Bauhaus, who finished second, with Mark Cavendish (Quick-Step AlphaVinyl) third.

It was touch and go over the final kilometres as to whether the sprinters would get to contest the finish after the day’s breakaway resisted. Their collaboration finally faded in the finale, however, and the quartet featuring Jumbo-Visma’s Pascal Eenkhorn and Julius van den Berg (EF Education EasyPost) were caught after the flamme rouge.

Démare extended his lead in the maglia ciclamino to 238 points, Mark Cavendish more than 100 points behind in the points competition.

A good day for France’s fast man, but for his compatriot Romain Bardet it was a day to forget, the DSM rider forced to abandon after succumbing to illness and climbing off after 35km of the stage. Bardet started the day fourth overall and was poised for the GC battle in the final week of this Italian Grand Tour. 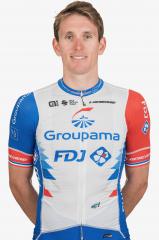