Demi Vollering and SD Worx put on a show for the third day running to take another stage win and the overall victory in the Basque Country. Demi Vollering (SD Worx) took her third stage in a row to win the first ever Itzulia Women stage race in spectacular fashion.

The third and final stage of Itzulia Women was an attritional 139.8 km affair, starting and finishing in Donostia-San Sebastián, on a route borrowed from the Clásica San Sebastián.

A breakaway of five led the race until the challenging 2nd cat. climb of Jaizkibel, where French rider Morgane Coston (Arkéa) left her companions behind and struck out 55 km from the finish.

With Coston digging deep up the road, the attacks began in the peloton about a minute and a half behind, which put an end to the work done by the early attackers. SD Worx continued to apply the pressure to their rivals with repeated accelerations, but no real movement was made until Shirin van Anrooij and Jeanne Korevaar (Liv Racing Xstra) found daylight inside 25 km to go.

The Dutch pair joined the lone leader in no time, and at the first passage of the finish line (about 17.5 km from the finish) they led the peloton by a little over a minute, with Mieria Benito (Massi-Tactic) attacking into the gap.

There was a lull in the action on the approach to the last climb of the race, the Murgil-Tontoro, a short but punishing ramp of 2 km at 10.1%, with maximum gradients of over 14%. As Coston took a turn on the front of the break for the first time since being joined, Shayla Gutiérrez (Movistar) accelerated in the peloton, ramping up the pace as the better represented teams prepared for a climbers’ lead-out.

Van Anrooij proved the strongest and freshest of the leaders as they hit the steepest slopes, but what was left of the peloton had the young rider’s card marked. Ashleigh Moolman Pasio was the SD Worx rider who led the group for race leader Demi Vollering, as behind, tiring riders began to zigzag across the road.

Contact was made with Van Anrooij a few hundred metres from the crest of the Murgil-Tontoro, and Vollering attacked over the top to lead the way down the technical descent with a few seconds over the eight-strong chase, which contained two of the leader’s SD Worx teammates.

“I had some left on the last climb,” Vollering told media immediately following the stage. “So I decided to go all the way and give it my all one more time.”

Vollering descended back into town as if on rails, stretching her advantage to about 25 seconds at its widest. The gap fell on the flat run-in, but the race leader still held 14 seconds as she went under the flamme rouge, enough to enjoy another dominant victory in the Basque Country.

“This is a really cool race. I like the course, although it was very difficult today due to the heat,” said Vollering. “I really have to thank the team. Although we started with only four riders, we did have four very strong climbers. You also need that here. It goes up and down all the time.”

Liane Lippert (DSM) led the group home and Marta Cavalli (FDJ Nouvelle-Aquitaine Futuroscope) took her second third-place in as many days, while Niamh Fisher-Black’s fourth place saw her hold on to the best young rider’s jersey ahead of teammate Anna Shackley, another win for SD Worx. The GC meanwhile is unchanged, with Pauliena Rooijakkers (Canyon//SRAM) and Kristen Faulkner (BikeExchange-Jayco) joining Vollering on the final podium. 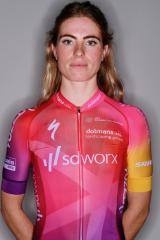