Stage 18 was meant to be a routine sprint stage, but the peloton was caught napping and Dries De Bondt won from the breakaway. Dries De Bondt (Alpecin-Fenix) took a surprise victory from the breakaway on stage 18, which was meant to be the last chance for the fast men to have their day at this year’s Giro d’Italia.

Four strong riders got away shortly after leaving Borgo Valsugana and their powerhouse composition put the peloton on edge. With Edoardo Affini (Jumbo-Visma), Magnus Cort (EF Education-EasyPost), Dries De Bondt and Davide Gabburo (Bardiani-CSF-Faizanè) setting in for what would surely be a fruitless task, the sprinters’ teams set a stiff pace in an effort to keep the breakaway on a tight leash.

There was a brief flurry of excitement as the stage neared the 100 km to go mark when a restless Rui Costa (UAE Team Emirates) took over the front of the peloton. The former world champion proceeded to lift the pace so much that he single-handedly brought the gap down to barely a minute, splitting the peloton in the process. However, the road captains from a number of teams soon put a stop to his effort and restored order.

The gap yo-yoed for an hour or so before the powerful breakaway piled on the pressure with 60 km to go, and stretched their advantage to almost three minutes after the Muro di Ca’ del Poggio (1.1 km at 12.3%). From there, the stress level gradually increased in the peloton, which was only able to slowly chip away at the gap as the leaders neared the finishing circuits.

With all hands to the pump in the peloton, there was a split further back and Juan Pedro López (Trek-Segafredo) – now youth classification leader following João Almeida’s (UAE Team Emirates) withdrawal – was one of those caught out. The young Spaniard would lose 2:43 on GC, but just about maintains his position in the standings.

The chase was nearing panic stations as the breakaway took the bell at 13 km to go, still holding an advantage of 1:09. The gap didn’t drop below a minute until 6 km to go, and it had begun to dawn on the desperate peloton that they’d royally messed up.

It was close, but the breakaway made it with just 14 seconds in hand. Cort went early and burned out fast, and it was De Bondt who narrowly out-sprinted Affini to take a maiden Grand Tour victory.

“I think it was a collaboration until the last K, but we didn’t speculate,” De Bondt replied when asked how he’d won. “I knew Affini would go from far in the sprint and I had to be on his wheel. Magnus had the pressure, so it was logical that he would go first.

“There was no moment of gap, and everyone gave full, full, full to the line. It was written in the stars that the sprinters would win, and we made a plan the four of us to work to the end and we pulled it off.”

In the GC race, the only significant change happened before the stage even got underway as fourth-place João Almeida (UAE Team Emirates) was forced to withdraw with a Covid-19 positive. This shifted everyone up a step and increased the gap between the podium and the rest with Vincenzo Nibali (Astana-Qazaqstan) 5:48 down in fourth. Second-place Jai Hindley (Bora-Hansgrohe) had a nervous moment when he suffered a puncture towards the finish of the stage, but he was inside the last 3 km so his three-second deficit still stands as the peloton looks to the final three stages of the Giro. 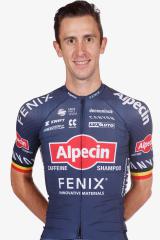