Stage two of the Vuelta a Burgos Feminas saw an early breakaway of seven, who got clear after just under 40km of racing, stay the course.

Natalia Franco (WCC Team) and Catalina Soto (Bizkaia – Durango) attempted to bridge to the leaders but were stuck in limbo and eventually caught after the peloton began to chase in earnest.

On a much faster day than the previous stage, which saw winds affect the race, the peloton started to bring down the gap with around 40km to go with SD Worx, the team of race leader Lotte Kopecky, setting the pace with the help of Canyon//SRAM.

As the gap began to diminish Team BikeExchange attempted to attack with Kristen Faulkner however the American was reeled back and the chase continued.

In the closing kilometres it was the seven rider breakaway against the might of the peloton with all of the teams working hard to pull them back. With 5km to go the gap fell to under one minute but the breakaway riders continued to work well together despite having spent 90km in front.

As the seven riders approached the line and started their sprints the peloton came into view behind but it was too late. Buijsman and Vitillo were the two fastest riders and came to the line together resulting in a photo finish. Despite Buijsman’s celebrations as she crossed the finish, Vitillo was in fact the rider who took the stage with Vieceli taking third.

After stage two, Ducuara leads the GC by 6 seconds ahead of Kopecky and the rest of the peloton from yesterday’s sprint finish. 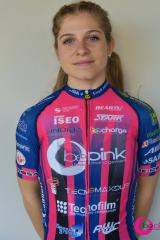