Koen Bouwman (Jumbo-Visma) won stage 19 of the Giro d’Italia from the breakaway following a final turn that saw Andrea Vendrame (Ag2r Citroën) and Attila Valter (Groupama-FDJ) go wide and almost off the course.

Despite a dig from Richard Carapaz (Ineos Grenadiers) on the final climb the GC fight will go down to the final mountain day and then the stage 21 time trial. Carapaz and second place Jai Hindley (Bora_hansgrohe) are still separated by just three seconds.

“Yeah it was a pretty hard day again, the guys rode really well, we tried to look for the opportunities out there. But yeah it just didn’t really work out the way we wanted to. The guys still rode really well,” Hindley said after the finish after Bora-Hansgrohe drove the pace up the Kolovrat climb and expectation grew that Hindley would make a move on the pink jersey.

“I mean, it wasn’t really an ideal stage to really put the hammer down but yeah we knew this second last climb was a real steep one and the descent was going to be really technical and really tricky, so yeah we just wanted to hit it on the front and stay out of trouble. But yeah I mean it was a pretty strong breakaway also, I think we just let the gap go out a bit too far. But anyway the initial plan today wasn’t to go chasing the break but we just changed it out on the road.”

Carapaz led Hindley across the line, Mikel Landa (Bahrain-Victorious) third behind them once again. This top three are within a minute of each other and have the podium places pretty much wrapped up with Vincenzo Nibali (Astana-Qazaqstan) nearly five minutes further back in fourth.

“Coming into the final climb I knew it was going to be a punchier finish which actually suits [Carapaz] a lot more than me to be honest, but yeah I still tried to have a crack and yeah it was a hard finish.”

“Tough day coming up tomorrow but I think that will be the big decider. We’ll see how it goes,” Hindley said.

And taking the maglia rosa tomorrow is the goal?

“Yeah definitely, that’d be a dream scenario to try and get some time tomorrow and try to get a buffer on the TT. It’s not going to be easier but I reckon we’ll be up for it.” 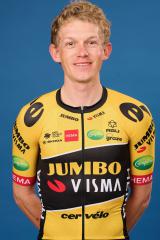