Jai Hindley put his TT demons to bed on Sunday’s stage 21 to seal overall victory at the 2022 Giro d’Italia. After three weeks of impeccable racing by the Bora-Hansgrohe team, their leader becomes the first ever Australian Giro champion, and only the second grand tour winner from Down Under after Cadel Evans.

“It’s a beautiful feeling,” Hindley said from the stage of the Verona Arena. “There were a lot of emotions out there today. I had in back of my mind what happened in 2020, and I wasn’t gonna let that happen again, to be honest. To take the win is really incredible.”

Richard Carapaz (Ineos Grenadiers) came back fighting to take a top-10 finish on the stage, the best of the GC men, but he could only take seven seconds away from Hindley on the 17.4 km course. Having started the day just 26 seconds ahead of Mikel Landa (Bahrain-Victorious), there had been rumblings that the major tussle might be for the minor placings, but the Ecuadorian national champion proved his superiority against the clock, and Landa ends the Giro 3:24 down in third.

The only real change in the top 10 was at the bottom, where Hugh Carthy (EF Education-EasyPost) moved up to ninth, swapping with Giro revelation Juan Pedro López (Trek-Segafredo) who is unlikely to care as he leaves Italy with the white jersey.

The fight for the stage win was got out of the way earlier in the afternoon. Michael Hepburn (BikeExchange-Jayco) set a convincing benchmark in the first hour, a time that pre-stage favourite Edoardo Affini (Jumbo-Visma) could not better. The target was moved by Magnus Cort (EF Education-EasyPost) and Mauro Schmid (Quick-Step Alpha Vinyl), but as the latter crossed the line, Sobrero was already on course and setting the stage alight.

The Italian national champion was fastest by a huge margin at the intermediate timing point atop the 4 km climb (5.4%), and ultimately Sobrero crossed the line with a blistering time of 22:24. Mathieu van der Poel (Alpecin-Fenix) was expected to challenge for the stage, but he settled for third place behind Thymen Arensman (DSM) in second, whose performance this past week carries huge promise for the future. 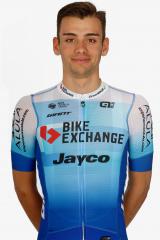