Hindley winning stage 9 of the 2022 Giro d'Italia on Sunday afternoon.

Juan Pedro López retains pink, but the GC looks much clearer after a mountain battle on stage 9 of the Giro d'Italia.

Jai Hindley (Bora-Hansgrohe) took the win on stage 9 of the Giro d’Italia, joining a selective group of riders to have won atop of the infamous Blockhaus climb.

With only the second summit finish of the race, stage 9 was the first serious mountain stage which many have described as the hardest of the 2022 Giro d’Italia. The climbing began from the very start, with a tricky first hour of lumps and bumps to make the battle for the breakaway particularly interesting.

After attacking from kilometre zero, a nine-man breakaway finally came together after 30 km and settled in for the meat of the stage, which came about 100 km later. With the peloton just two and a half minutes further back, Nans Peters (AG2R-Citroën) initiated the attacks out front on the uncategorised climb to the foot of the first-category Passo Lanciano. He drew out the Drone Hopper pairing of Eduardo Sepulveda and Natnael Tesfazion, and they were eventually chased down by Diego Rosa (Eolo-Kometa), of stage 6 solo breakaway fame (or infamy).

Rosa and Tesfazion ultimately led the race over the summit, the Italian adding to the points he’d earned earlier in the day to move into the virtual KOM lead, the duo carrying an advantage of over three minutes to the peloton with 43 km to go, chasers wedged in between.

The punchy Eritrean – a two-time Tour of Rwanda winner and serial breakaway rider – pushed on down the descent, but disaster struck on a sweeping corner as Tesfazion misjudged the turn and somersaulted into the bushes at high speed. The 22-year-old would finish the stage after receiving immediate roadside assessment.

That left Rosa to take on the descent alone, chasers and the peloton gaining on him fast. The addition of Peters and Joe Dombrowski (Astana-Qazaqstan) gave Rosa – shrugging reluctantly – a little more oomph, but with 20 km of climbing to go, the Ineos Grenadiers-led peloton was well within a minute.

The remarkably fresh Dombrowski was the last man standing as the GC teams prepared themselves for the final showdown, and it was all together just inside 16 km from the summit.

It was a familiar sight as the Ineos Grenadiers lined it out on the front of the peloton, and their pace did some serious damage. Local man Giulio Ciccone (Trek-Segafredo) was the first big name to fall away, but with UAE Team Emirates joining the pace-setting, Simon Yates (BikeExchange-Jayco) was the biggest surprise, falling away with more than 10 km left of the Blockhaus.

As more and more GC riders were put in trouble – Wilco Kelderman (Bora-Hansgrohe), Pello Bilbao (Bahrain-Victorious), Hugh Carthy (EF Education-EasyPost) and Guillaume Martin (Cofidis) among those dropped – Juan Pedro López (Trek-Segafredo) held firm in the lead group until 8 km to go, and he was left in a lonely battle to retain his pink jersey.

Only eleven riders were left in the main group with 5 km to go, Richie Porte (Ineos Grenadiers) setting a fierce pace on the front. 500 metres later, Richard Carapaz made the move they’d all been waiting for, and Romain Bardet (DSM) and Mikel Landa (Bahrain-Victorious) – who carried evidence of a crash earlier in the stage – were the only two who could follow. It fell to João Almeida (UAE Emirates) to drag the surviving GC contenders up to the leaders.

With Vincenzo Nibali (Astana-Qazaqstan) and Alejandro Valverde (Movistar) losing touch, Almeida, Hindley and Domenico Pozzovivo (Intermarché-Wanty-Gobert Matériaux) joined the front for the last 2 km. Landa, Carapaz and Bardet looked to be the strongest, but a bit of stalling in the final kilometre saw a regrouping and six riders would fight over stage honours.

Hindley led the group through the final corner for the slow-motion sprint and the Australian held on to take a phenomenal, ever-so patient victory ahead of Bardet and Carapaz.

A minute forty seconds after the winner crossed the line, a delighted López came home to retain the pink jersey by 12 seconds over Almeida, with Bardet now sitting third overall two seconds further down. Rather later, pre-race favourite Simon Yates finished 11:15 in arrears – a little after Wilco Kelderman – plummeting to 25th on GC, presumably suffering with the knee injury he picked up on stage 4 to Mount Etna.

Elsewhere in the GC race, Hugh Carthy also had a difficult day, finishing 3:48 behind Hindley, and Ivan Sosa’s disappointing Giro continues, his favourite status also well and truly scratched out with 20th on the stage. However, Movistar isn’t completely at sea thanks to Valverde, who finished 47 seconds down for ninth on the stage, and now sits just outside the overall top 10. 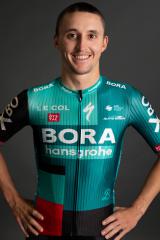 Hindley winning stage 9 of the 2022 Giro d'Italia on Sunday afternoon.