Santiago Buitrago dusts himself off to take resurgent stage 17 victory

It was a good day for Bahrain-Victorious, which saw GC leader Mikel Landa climb into the top 3 as their young star claimed the stage. Santiago Buitrago (Bahrain-Victorious) soloed to a defiant victory after crashing hard earlier in stage 17 of the Giro d’Italia. After climbing to an emotional second on stage 15, he went one better on Wednesday to secure the biggest victory of his fledgling career.

“A very special day for me after Sunday and after the crash,” Buitrago said post-stage. “Today is a victory for me, for the team, that I have been looking for for some time. I think this gives us lots of morale for the rest of the Giro and to keep looking for the GC with our leader.”

The fight for the breakaway was one of the more tame of the 2022 Giro d’Italia so far, with 25 riders going clear on the unclassified climb that kicked off the 168 km stage from Ponte di Legno to Lavarone.

With Koen Bouwman (Jumbo-Visma) tightening his grip on the blue jersey, Jumbo-Visma were on the offensive with no less than three riders in the escape of the day. But it was Mathieu van der Poel (Alpecin-Fenix) who made the most decisive move on the rolling terrain that led to the first-category Passo del Vetriolo. He was joined by three others including Guillaume Martin (Cofidis), but there was a determined chase behind them.

The leading trio was joined a little over 35 km from the finish by a five-strong chase group, including the 22-year-olds Buitrago, a graduate of the Fundación Esteban Chaves team, and Gijs Leemreize (Jumbo-Visma), who demonstrated extraordinary descending ability to split the group on the descent, Van der Poel the only one to follow.

The final climb of the day was another monster Cat. 1 climb, and despite all the efforts he’d put in throughout the stage, Van der Poel managed to ride his compatriot off his wheel on the lower slopes. He’d gone too soon, however, and Leemreize was able to claw himself back up, over the top of him, and into the lead with a stage finish within touching distance.

Meanwhile, the group behind was struggling to work together. After several attempts by Hugh Carthy (EF Education-EasyPost) among others, Buitrago chose his moment to accelerate hard and leave the group behind. Evidently the freshest on the road – despite an unpleasant high-speed crash much earlier in the stage – he soon leapfrogged a dropped Van der Poel as he ate into Leemreize’s gap.

The steepest gradients on the Monterovere were near the top, and that’s where Buitrago made the difference. Once on Leemreize’s wheel, the Colombian took a moment to catch his breath and zip up his jersey, before attacking over the top and striking out for the finish.

Buitrago extended his gap on the 8 km run-in to the finish where he roared to the biggest victory of his career. Leemreize hung on to take runner-up spot 35 seconds later, and Jan Hirt (Intermarché-Wanty-Gobert Matériaux) was the best of the rest from the breakaway, beating Carthy to claim another podium finish 24 hours after his stage win.

“I am very moved,” Buitrago said after the stage. “It’s my first Giro and thanks to the team that believed in me, my family, my girlfriend, and everyone’s been supporting me. This is for all of them and I am very happy. It was a cold-headed moment. I knew the others were up ahead, but I felt I had the legs and I wanted to try. When I got close to them I knew how fast they are and I had to finish alone to have a chance to win this stage.

“This victory brings me a lot of joy and pride that I did my job well and that I finally got the victory that I have been looking for for so long.”

Further down the road, the GC race waited until the final climb to grind itself into gear, with Bahrain-Victorious on the offensive once again. By the top of the final climb, only Richard Carapaz, Jai Hindley, Mikel Landa and teammate Wout Poels were left in the group of favourites. Meanwhile, João Almeida was in a lonely battle to limit his losses, but he would ultimately drop to fourth having lost over a minute on the climb.

Carapaz, Hindley and Landa all tried to apply the pressure on the steep gradients, but again, they were evenly matched. The trio rode together to the finish, forming up with some of those dropped from the breakaway, where Carapaz and Hindley sprung one last attack on the ramp to the line, taking six seconds away from Landa. After two tough days in the mountains, the margin between the top two is just three seconds, while Landa is now 1:05 down in third.

Further down the standings, there was a lot of slipping and sliding on stage 17. Most notably was Jan Hirt bouncing up to seventh after another day in the breakaway, while his teammate Domenico Pozzovivo suffered a bad day, dropping four places to tenth and losing a further 8:42 to the maglia rosa. 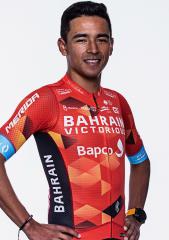