The stage 2 time trial pitted the specialists against the GC riders on a day that saw some lose valuable time. Simon Yates (BikeExchange-Jayco) stormed to a surprise victory on stage 2 of the Giro d’Italia, a 9.2 km time trial in Budapest that saw several GC riders make an early statement as the specialists lost out.

The first of two time trials at the 2022 Giro d’Italia was an intriguing affair. On paper it looked like a fairly typical TT course, but the final kicker, cobbles included, proved considerably more challenging in reality, which saw a real mix of possible winners.

Pre-stage favourite Edoardo Affini was the second of two Jumbo-Visma riders to take the hotseat in quick succession, but Lennard Kämna (Bora-Hansgrohe) surprised everyone by knocking the Italian down by a few seconds.

The Italian national champion Matteo Sobrero (BikeExchange-Jayco) was next to take the top spot, but the GC riders soon came along to spoil the party. Tom Dumoulin (Jumbo-Visma) was the first rider to go under 12 minutes, but the 2017 Giro winner couldn’t even catch his breath before Simon Yates flew across the finish line five seconds faster.

Race leader Mathieu van der Poel came through the time check just a second slower than Yates, with only the climb ahead of him. In the end, he fell just three seconds short of a second consecutive stage victory, but he keeps hold of the pink jersey as Yates moves up to second on GC, and Dumoulin jumps to third.

There’s obviously still a long way to go, but the overall picture looks much clearer already, with Yates and Dumoulin clearly on some fantastic form, and Wilco Kelderman (Bora-Hansgrohe), João Almeida (UAE Team Emirates), Romain Bardet (DSM), Richie Porte and Richard Carapaz (Ineos Grenadiers) all within thirty seconds. One of the biggest losers of the day was Ivan Sosa (Movistar) who lost 1:23 to the stage winner over the course of the time trial. 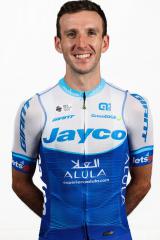