Two Italian victories in as many days.

Another Giro d’Italia stage win for Alpecin-Fenix but not thanks to Mathieu van der Poel.

But the fact it was Stefano Oldani who won stage 12 from the breakaway didn’t stop him from doing his best impression of his team leader, collapsing to the ground after the finish line in true Van der Poel style.

The Italian had escaped from the larger breakaway group over the top of the La Colletta climb with little over 50 km to go alongside compatriot Lorenzo Rota (Intermarché-Wanty-Gobert Matériaux) and Jumbo-Visma’s Gijs Leemreize.

None of the trio had ever taken a professional victory before and it was Oldani who broke his duck, proving to have the best finishing kick as he crossed the line ahead of Rota with Leemreize in third.

After a 10-day wait for an Italian stage winner at their home Grand Tour, Italy now has two in as many days after DSM’s Alberto Dainese won the bunch sprint yesterday.

Nearly a minute later Bauke Mollema led a chase group across the line that included both Bora-Hansgrohe’s Wilco Kelderman and BikeExchange-Jayco’s Lucas Hamilton. Having gained nine minutes on the peloton, Kelderman rose to 13th on GC and Hamilton to 16th, now around three minutes off the maglia rosa.

With Jai Hindley in 5th overall and Emanuel Buchmann in 9th, Bora-Hansgrohe now have a potential third trident in the GC battle to come. 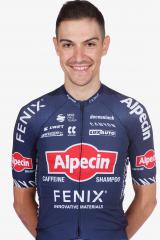