Demi Vollering doubles up in the Basque Country. Demi Vollering (SD Worx) has backed up her stage one victory and reinforced her GC lead at Itzulia Women, taking the win on the second stage in Mallabia.

The group was caught right at the bottom of the final climb, Karabieta, for which it seemed the GC favourites were waiting to launch their attacks. Right from the bottom slopes of the climb SD Worx were very much the team in control sending Demi Vollering, Ashleigh Moolman Pasio and Niamh Fisher Black to the front to whittle the group down.

Vollering used the descent to try and distance the other riders which saw the less-confident Rooijakkers lose the wheels temporarily. The Canyon//SRAM rider regained contact with the group at the bottom of the climb and a bigger group joined the leaders including Lucinda Brand (Trek-Segafredo) and Juliette Labous (Team DSM) but after another attack from Vollering a new selection was made at the front including Vollering, Rooijakkers, Marta Cavalli (FDJ Nouvelle Aquitaine Futuroscope), Olivia Baril, and Juliette Labous (Team DSM).

On the approach to the finish the group worked together to fend off a second containing Fisher Black, Moolman Pasio, Floortje Mackaij (Team DSM), Elise Chabbey (Canyon//SRAM), and Faulkner, just managing to keep them at bay.

In almost a repeat of the previous stage’s finish, Rooijakkers was the first to attack, with 700m to go, but was quickly shut down by Vollering who launched her move a few hundred metres later and crossed the line with a two-second gap to Baril and Cavalli in second and third.

“Today was awesome. This finish I really like,” said Vollering after the stage. “I tried multiple times to come already earlier away because I felt I was strong today so then you also need to try it of course. Then in the downhill I felt really confident on my bike and on the wheels we have now so I went full gas for it but in the end it didn’t stay away and then we were with a group and then I was in the perfect position because I was able to rest a bit there because I have a lot of teammates behind me. Three of my team so if the group would come back then it was also good for me.”

“I hope I can keep the yellow jersey tomorrow, that would be great.”

Asked about her current form, the Dutch rider said: “I think I came really good out the Ardennes I felt still pretty fresh and i kept on training so I have a big block now and also to see after this big block of training how I’m doing here so that’s nice to see. It worked pretty well and I’m looking forward to the rest of the season.”

SD Worx once again had three of their four riders in the top-10 with Fisher-Black winning the bunch sprint for sixth place and Moolman Pasio coming in 9th.

Vollering now leads Rooijakkers by 22 seconds in the general classification with Faulkner 42 seconds behind and Cavalli and others over a minute in arrears. 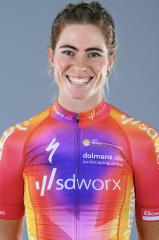