Jai Hindley (Bora-Hansgrohe) crosses the line on stage 20 of the 2022 Giro d'Italia.

Worth the wait, Jai Hindley takes control of the Giro d’Italia in the 11th hour

Alessandro Covi took stage 20 victory from the breakaway, while in the GC race, the fireworks waited until the final climb. Jai Hindley (Bora-Hansgrohe) took over the maglia rosa on the penultimate day of the 2022 Giro d’Italia, as Alessandro Covi (UAE Team Emirates) took stage honours from the breakaway.

It took a little while for the breakaway to form, and the peloton briefly found itself in pieces after a tricky first 30 km, but once happy with the 15-long list of escapees, the GC teams applied the brakes and settled things down, allowing dropped riders and key domestiques back into the fold. Bahrain-Victorious soon took control of the bunch, apparently keen to keep the break within six minutes on the way to the first of three mountain tests.

The peloton left the breakaway to enjoy the first-category Passo San Pellegrino and hors-catégorie Passo Pordoi. The latter is the highest point of the Giro d’Italia, thus earning Cima Coppi status which carries its own prestige and a prize pot, claimed today by Alessandro Covi (UAE Team Emirates) who attacked his breakaway companions with about 53.5 km to go. The Pordoi peaked out just under 45 km from the finish, and when the lone leader reached the summit, the gap to the peloton – still led by Wout Poels of Bahrain-Victorious – was still 5:50.

With cohesion breaking down in the eight-strong chase group – which included Lennard Kämna (Bora-Hansgrohe) – and the pace still steady in the peloton, Covi’s gap increased on the descent, and the young Italian started climbing towards the iconic Marmolada (Passo Fedaia) with 6:05 over the main bunch.

The final first-category climb of the Giro, the Passo Fedaia, has a deceptive 7.8% average over 12.9 kilometres, the last five of which consistently exceed 10% (max 18%), and it was here that the stage would reach its climax.

With Covi holding off Domen Novak (Bahrain-Victorious) for the stage win, the Ineos Grenadiers took control of the favourites group as they hit the steepest ramps. They successfully whittled the group down to just half a dozen riders, but when Pavel Sivakov finally pulled off, it was Hindley who made the first move, which only Richard Caparaz could follow. The Australian was happy to set the pace for a few-hundred metres, climbing up to the wheel of his teammate Kämna who’d spent all day in the break.

Together, Kämna and Hindley thoroughly cracked Carapaz, and with the pink jersey’s shoulder’s drooping, the Australian accelerated into the last few punishing kilometres. By the finish line, he’d put almost 90 seconds into the race leader, putting Hindley into the maglia rosa with a 1:25 buffer for the final stage time trial on Sunday.

Mikel Landa (Bahrain-Victorious) was dropped in Hindley’s first acceleration, but he was able to overhaul Carapaz on his way to the finish, and goes into the final day 1:51 down on the new race leader, and 26 seconds behind Carapaz. 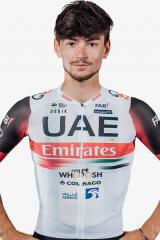 Jai Hindley (Bora-Hansgrohe) crosses the line on stage 20 of the 2022 Giro d'Italia.