No matter what, some things will always be funny.

One of these is when someone thinks they’ve won when they haven’t and celebrates with the full force of victory. It elicits a schadenfreude embedded deep within the human psyche.

At the Tour de Suisse, with all due respect, the stakes aren’t that high, there was little need to feel sympathy for EF Education EasyPost’s Alberto Bettiol, a rider who has won the Tour of Flanders and can now ride that wave for life. The Italian thought he’d outsprinted Michael Matthews (Bike-Exchange-Jayco), Andrea Pasqualon (Intermarché-Wanty- Gobert Matériaux) and Matteo Trentin (UAE Team Emirates) and snatched an impressive stage 2 win.

He raised his fist in the air as his pink jersey crossed the line first in unmistakably perceived victory. The question remains, however: how did Bettiol, in this age of the internet, of Twitter, of live-streaming race coverage on your phone, not know that DSM’s Andreas Leknessund had already won the stage by 38 seconds?

After the finish, some UAE Team Emirates riders crowded Bettiol in mock celebration, lovingly poking fun at his mistake, before a TV interviewer managed to find the 28-year-old to get the explanation.

“Yeah, yeah, yeah,” Bettiol replied. “I mean, I bet my friend so I was still happy.”

At least he’d taken the gaff in good humour.

“I don’t know, you see my radio is off,” Bettiol continued. “Now my friends will joke with me today and tomorrow.”

Instead, the 23-year-old Norwegian Leknessund claimed a breakthrough victory, outlasting his fellow escapees to power over the day’s final climb and hold on until the finish line. Born inside the arctic circle in the city of Trømso, the sun doesn’t rise for two months of the year from late November until the end of January.

Tears of joy sprung from his eyes as he composed himself in the winner’s tent after the finish (presumably due to this career milestone and not the lack of sunlight in his hometown) before stepping up to the podium to ring a large prized bell, which will likely only darken his neighbours’ winter when he returns home at the end of the season. 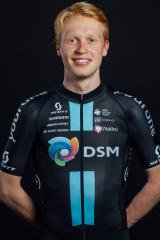