Alexis Vuillermoz proves strongest after the break fought it out for stage honours.

Recently he’d been discussing how breakaways had seemingly become better at holding off races ending in a bunch sprint, yet this particular one supposedly appeared doomed despite the downhill run into the finish line in Brives-Charensac, from a tech viewpoint at least.

That was without taking into account Wout van Aert. The Jumbo-Visma man was wearing a slightly different yellow jersey as the leader of the race courtesy of his stage 1 win, and given the Belgian’s talents, he found few willing collaborators to help bring the breakaway back just so he could cross the finish line first.

That thinking can hardly be faulted, as Van Aert led the peloton across the line ahead of Ethan Hayter (Ineos Grenadiers) for the second day in a row, but that was only good enough for 6th place as the day’s break survived to contest the finish between themselves.

The harmony of the escape group was impeccable up until the final kilometre, by which point even Ineos’ Filippo Ganna hitting the front and closing the gap by the second wasn’t enough to bring them back in.

And so the victory was to come from the quintet, the Norwegian Anders Skaarseth from Uno-X supposedly possessing the fastest finish, but that was before Olivier Le Gac (Groupama-FDJ) took the flyer of all flyers around the final bend with 400m to go.

It looked to be the winning move, the gap holding before Total Energies’ Alexis Vuillermoz agonisingly clawed his way back and then held off a charging Skaarseth to take the victory. The five-second gap back to the peloton along with the 10 bonus seconds for the stage winner gave the Frenchman the yellow jersey as well.

A first French stage winner at the Dauphiné since Julian Alaphilippe (Quick-Step AlphaVinyl) in 2019. Vuillermoz will now face a challenge to hold it tomorrow as the peloton take on a lumpier day culminating in a second category summit finish. 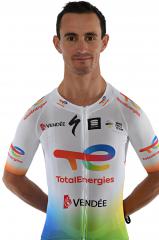