The first stage of the race to be broadcast live was full of action.

Stage one of The Women’s Tour was defined by two unfortunate incidents. The first in which riders were forced to wait for over 40 minutes while the race was neutralised due to an incident ahead of them. The second was a finish some have described as dangerous after Lorena Wiebes and her Team DSM train, along with Coryn Rivera, crashed into a barrier on a 90-degree corner just before the line.

Despite live coverage of the race from the flag drop to the finish, there were no teams willing to instigate an early break on a wet day on the roads of Essex.

A few kilometres later, Danielle Shrosbree (CAMS-Basso) launched an attack with 60 km to go and managed to force a gap which she stretched to around 1-45 before the race was neutralised due to an incident involving a police motorcycle and another vehicle ahead of the race.

Riders were pictured shivering in down jackets and in the case of some of the Coop-Hitec Products riders, dancing on the side of the road.

After 40 minutes of riders sitting in team cars and trying to stay warm, the race was re-started and Team DSM immediately placed riders on the front of the peloton to bring Shrosbree back in time for the sprint, keeping the pace high.

Team Coop-Hitec Products and EF Education First-Tibco were assisting Team DSM in the chase but Shrosbree’s gap was holding firm at around 50 seconds. That was until, with 20 km to go, Ellen van Dijk and Audrey Cordon Ragot of Trek-Segafredo and riders from Movistar came up to assist the chase, bringing Shrosbree’s gap down to around 20 seconds.

Liv Racing Xstra, with Dutch rider Thalita de Jong in her first race with the team, also joined the chase and with 15km until the line Shrosbree was caught. Liv continued to keep the pace high with Movistar and Team Jumbo-Visma also contributing with Trek-Segafredo and Team DSM not far behind.

The peloton stayed together all the way to the outskirts of Bury St Edmunds where a technical finish awaited the riders. As the peloton entered the town onto small, twisting roads Pffeifer Georgi led the Team DSM lead-out train through. Just after Georgi pulled away, however, a 90-degree turn spelled disaster for the entire DSM train, with Coryn Labecki and Karlijn Swinkels of Team Jumbo-Visma also getting caught up in the crash.

With two of the favourites for a bunch sprint out of the picture, and others caught behind, it was Clara Copponi of Team FDJ Nouvelle Aquitaine Futuroscope who sprinted to the win ahead of Sofia Bertizzolo (UAE Team ADQ), and Elena Cecchini (Team SD Worx). 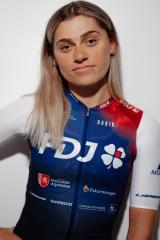 Lorena Wiebes makes up for mishap by winning stage two