Primož Roglič and Jonas Vingegaard cross the line for a Jumbo-Visma two-one on stage 8 and one-two overall at the 2022 Critérium du Dauphiné.

Jumbo-Visma leaves the Critérium du Dauphiné with three stage wins, the green and yellow jerseys, and a blueprint for Tour success.

Primož Roglič and Jonas Vingegaard cross the line for a Jumbo-Visma two-one on stage 8 and one-two overall at the 2022 Critérium du Dauphiné.

It was Jumbo-Visma against the world from the beginning of the 2022 Critérium du Dauphiné, and but for an uncharacteristic lapse in judgement and a few games of chicken with the breakaway, it’s been Wout van Aert who benefited most until the final weekend.

The GC favourites came to the fore on Saturday’s stage 7 and, as expected, Primož Roglič took over the yellow jersey in the mountains. Stage 8 was the final test, and with Roglič and Jonas Vingegaard sitting first and second overall, Jumbo-Visma was very much in control.

Clearly the strongest in the race, Vingegaard and Roglič thrived in the high Alps, taking an emphatic one-two on the final stage, a reverse of their finishing positions overall.

“It’s finally nice to win some races in France,” Roglič joked after adding the Dauphiné to his first Paris-Nice victory this spring. “Not just us two, the whole team rode well and had everything under control all day. Jonas was super strong on the last climb too, so it was a crazy, incredible day for our team.”

The Dauphiné was one of few races missing from Roglič’s palmarès before this weekend; Jumbo-Visma too had never so much as made the podium. Another is, of course, the Tour de France. But with last year’s runner-up Vingegaard as co-leader – as confirmed earlier this season – it looks like Roglič and Jumbo-Visma should go into this year’s edition better equipped than ever.

After a stunning defeat in 2020, Roglič was highly motivated to duel Tadej Pogačar in 2021, but a nasty crash ruined any dreams he harboured of finally taking yellow all the way to Paris.

With Roglič heading home on the second weekend after a few days of nursing his wounds, Vingegaard went from super-domestique to team leader. Two weeks later, he’d proved time and time again that he meant business. After stage 9, the same day his teammate and leader left the race, the then-24-year-old Dane sat 5:32 behind Pogačar, and the margin in Paris was 5:20.

In Roglič’s absence, the story that characterised the 2021 Tour was not of Slovenian vs Slovenian, but a new rivalry between two young riders who were hard to separate in the latter half of the race. Like Pogačar, Vingegaard is a handy time trialist – he came third on the stage 5 ITT where the young Slovenian first stamped his mark – and he’s a very capable climber. He’s got all the tools.

At the Dauphiné, Vingegaard and Roglič have looked equally matched, illustrated by their one-two on the GC podium, and in that we’ve witnessed a dress rehearsal for next month’s Tour de France.

On Saturday’s stage 7, you might say Jumbo-Visma looked a little isolated on the last climb to Vaujany, but no one was able to put them under any real pressure. Vingegaard was the first of the two to make a move, testing the very reduced GC group, and with all but his own man visibly struggling, he then took control of the front and set an infernal pace.

There was no sign of weakness on the stage 8 finale. The whole team played their part, Wout van Aert sticking with the GC group to drive the pace until the foot of the climb to the Plateau de Salaison, and Steven Kruijswijk burying himself on the lower slopes.

Vingegaard then attacked the moment Kruijswijk peeled off outside 5 km to go. Roglič followed and the Dane looked back to determine the damage, seeing only Ben O’Connor (AG2R-Citroën) making an attempt to hang on. You could see Vingegaard pushing the mental throttle to sever the Australian’s elastic, and in the blink of an eye, it was done.

“It was quite incredible,” Vingegaard said after the finish. “We had the plan that I should attack and he should follow me, and we wanted to try to see if we could drop everyone, the both of us. And yeah, we succeeded with that, so I think we can be very happy and proud with what happened today.”

With the GC race in bits behind them, Vingegaard led Roglič almost the whole way up the last 5 km of the Dauphiné, and the pair crossed the line hand in hand, the Dane taking the stage and Roglič sealing overall victory ahead of his young teammate in second.

“Of course it’s very very nice, it’s one of the biggest races in the world,” said Vingegaard. “To win a stage and to be second overall is a very very nice result.”

After a difficult spring for the Dane, and Roglič himself recovering from a knee injury, this weekend’s performance bodes well for July. But while they’ll face some of the same riders as this week – O’Connor, Damiano Caruso, Jack Haig and Esteban Chaves among the Dauphiné’s top GC performers – the Tour’s main contenders are avoiding each other in the run-up.

“I think to be honest it would be hard for us to be one-two in the Tour because there’s a few more riders,” Vingegaard said when asked about replicating Jumbo-Visma’s Dauphiné result. “I mean Pogačar is there, [Dani] Martinez is there, [Aleksandr] Vlasov is there, I mean there’s a lot more GC contenders, you could say. So I think the competition will be a bit harder, and maybe it’s also harder to win. But we go for at least one of us trying to win the race.”

‘One of us’ is telling, from Vingegaard’s perspective at least. How co-leadership shakes out at the Tour – bearing in mind that Van Aert has also stated his intent to go all in for green – may not become clear until one of them has a bad day. But having two apparently equally matched contenders could be the secret to beating Pogačar who has a history of being left to his own devices. He’s had no problem with that up to now, but it looks like Jumbo-Visma has a formula that could, we hope, push the defending champion much harder than he’s used to.

“It’s crazy isn’t it,” Roglič said at the end of the Dauphiné. “It’s a great day for the team. It’s all going in the right direction. We can go to the Tour with confidence, but there is still some time and work to do.”

Van Aert’s green jersey was another success story to come out of the Dauphiné, another milestone met before the Tour. But while he’s celebrated plenty of personal glory this week, with two stage wins and a few days in the race lead, the Belgian champ also played a part in his friend and teammate’s overall triumph.

“It’s hard to say if Primož is improving because he doesn’t have much to improve. He’s won three times the Vuelta, but he was unlucky a few times in the Tour,” Van Aert told media after stage 8. “The strength of the team is even a bigger advantage than in the last years, and I believe this will be key in the Tour this year.”

Riders in the shop window

In the past, Jumbo-Visma has laid out their Tour plans several months before the race, but this year, teams are reluctant to release lineups too far in advance. The lingering presence of Covid-19 and other bugs that cut through the peloton makes predicting availability and performance more tricky than usual.

While Van Aert, Roglič and Vingegaard will only miss out through rotten luck, several others are putting themselves forward for consideration.

At the Dauphiné, Chris Harper, Tiesj Benoot and Steven Kruijswijk made strong cases for themselves, Harper doing the mid-stage workhorse role while Kruijswijk proved strong in the mountains. Spring superstar Christophe Laporte was also a key foil for Van Aert earlier in the week and could be put to work on the flat stages. He’s also Jumbo-Visma’s only Frenchman, which will help his case.

Elsewhere, Rohan Dennis and Sepp Kuss are among those auditioning at the Tour de Suisse, where the team is looking for stage wins and a final tune-up.

All things considered, Jumbo-Visma will be a force to be reckoned with in July. But there’s one Pogačar-shaped problem that will likely put them, surely the strongest team at the race, on the back foot before they so much as arrive in Copenhagen. 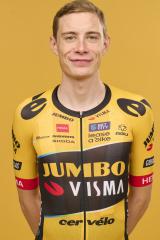