Italian champion wins on top of Black Mountain ahead of Kasia Niewiadoma and Grace Brown.

The sun finally made an appearance for the penultimate stage of The Women’s Tour where the Black Mountain loomed large over the day, snaking through the verdant Welsh valley.

The stage started with multiple short-lived attacks including one by points classification leader Lorena Wiebes who appeared to be having fun on a stage that she knew would not suit her strengths.

Lowden launched an attack from the group with 84km to go, staying away for 20km until the group caught back up to the former Hour Record holder who earned herself the combativity prize of the day.

Meanwhile, Bertizzolo was forced to drop from the group after a mechanical and was absorbed by the peloton which was being led by FDJ Nouvelle Aquitaine Futuroscope riding for race leader Grace Brown.

With 6km to go the first attacker of the day, Wiebes, made a last-ditch attempt to break away on the lower slopes of the final climb knowing that she would be dropped. The Dutch rider was caught almost straight away by a charging Trek-Segafredo with Ellen van Dijk towing Elisa Longo Borghini. A smiling Wiebes was pictured moments later getting dropped from the front group.

Ahead, van Dijk continued her usual work of setting a hard pace at the front of the peloton for her leader. Behind, the Italian national champion looked comfortable but all of the pre-stage favourites were present and correct in the group including Kasia Niewiadoma, Ashleigh Moolman Pasio and race leader Grace Brown.

With 2.4km to go Elisa Longo Borghini launched her attack with Alexander Manly and Kristen Faulkner glued to her wheel. The Italian kicked again but couldn’t shake the BikeExchange riders. Another acceleration still didn’t break the elastic so the Trek-Segafredo rider sat up allowing riders to come back to the small, elite group that had formed.

After a lull in which previous breakaway rider Lowden attacked, Longo Borghini launched yet another attack but the group of favourites were glued to the Italian’s wheel.

A headwind made it difficult to go clear so the group stayed together for the majority of the climb. Ashleigh Moolman Pasio attempted to jump but was also caught, Riejanne Markus of Jumbo Visma then suffering the same fate.

Kasia Niewiadoma launched a move with 1km to go but Kristen Faulkner went over the top of the Polish rider, drawing a selection including Alexandra Manly, Longo Borghini, Brown, Moolman Pasio, and Faulkner.

Despite her earlier attacks, it was Longo Borghini who had the legs to make a move in the final few hundred metres to edge out Niewiadoma for the stage win. Brown, in a valiant defence of her yellow jersey, took third. This leaves her tied for time with Longo Borghini going into tomorrow’s final stage. 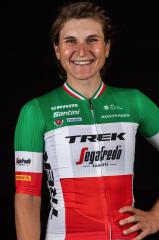