Question: What on Earth is going on at the Critérium du Dauphiné?

Weird things are happening at the Critérium du Dauphiné. What’s going on at the Critérium du Dauphiné?

Do we need to switch it off and turn it back on again?

Stage 6 took on a new level of weirdness in a race that has mostly consisted of answering the question ‘will Wout van Aert win today or mess it up?’

On the final day before the mountains, however, the Belgian finally seemed full. Two stage wins and a stint in the leader’s jersey meant Jumbo-Visma didn’t need to burn all their matches and kill themselves for another stage victory ahead of a weekend of testing the climbing legs of Primož Roglič and Jonas Vingegaard.

What about the rest of the peloton? If we also take out the teams represented in the break, TotalEnergies (Valentin Ferron), B&B Hotels-KTM (Pierre Rolland), Arkéa-Samsic (Warren Barguil), Quick-Step AlphaVinyl (Andrea Bagioli), Ag2r Citroën (Geoffrey Bouchard) and Cofidis (Victor Lafay), that still leaves 15 teams, 13 of which don’t have a win yet this week.

We’re talking about the likes of BikeExchange-Jayco and Dylan Groenewegen, Trek-Segafredo and Jasper Stuyven, as well as Lotto-Soudal, Israel – Premier Tech and EF Education EasyPost, who could all use the points in the ongoing relegation battle even if they don’t have a fast man to match up with the better squads.

Sure, the likes of Bora, Ineos, Jumbo-Visma and Trek-Segafredo all got involved in a so-called chase, but if they really wanted to catch the group of six that weighed an average of 64 kg, they could have done it.

Once it was clear the winner would come from the break the escapees continued to work cohesively, unlike their counterparts in the peloton. But then they pretty much just let Valentin Ferron jump clear early, the others watching each other, waiting for someone else to do the dirty work.

Sure, you don’t want to drag your collaborators to the line, but surely you also don’t want to just give up any chance of winning? It’s not like a win at the Dauphiné is an insignificant result either… simply, none of what’s gone on this week really makes much sense.

Between the non-winning members of the break and the passengers in the peloton, it was a day where bike racing was certainly not the winner.

Although the only true loser of the day was undeniably UAE Team Emirates’ Juan Sebastián Molano, who remonstrated with Hugo Page (Intermarché-Wanty-Gobert Matériaux) on the run-in over some indiscretion before punching the 20-year-old Frenchman in the face.

After the finish, Molano said “in the heat of the moment I made a dangerous mistake”, apologising to Page and all the riders in the race for the incident. “I understand why I was disqualified and can only say that I regret it and learn from it,” the Colombian said, not using any of the first 27 years of his life to get to grips with the fact that thumping someone in the face while riding a bicycle at warp speed is something you probably shouldn’t do.

The irony that kind of sums up this Dauphiné? Molano sprinted to seventh, the first across the line of the peloton, somehow finding more motivation than the rest of the bunch to acquire a result he knew wouldn’t count. Excellent. 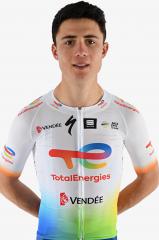