Majka and teammate Pogačar made time for a quick game before the finish of stage 4 of the Tour of Slovenia. Not for the first time this week, Rafał Majka and Tadej Pogačar attacked the dwindling Tour of Slovenia peloton on the way to stage 4’s summit finish, and with the young Slovenian in the race leader’s jersey, it was his Polish lieutenant who led the pair across the line, arm wrapped around his beaming, fearless leader.

Both riders already had one stage each, both have worn the green leader’s jersey, so how did they decide who should win on Velika Planina? Rock Paper Scissors, of course.

For entertainment’s sake, it’s just as well Pogačar picked the wrong weapon – maybe their choices too were by design – because he had already decided it was going to be the Pole’s day. The young Slovenian, though, couldn’t resist a joke.

“With him it’s…” Majka began, laughing behind his mask, when asked about the pair’s exchange on the way to the line. “He said, ‘ok you go for the stage’. We did a small bit, but he still tells me: you can win today. I’m still really happy, and this is good before the Tour de France.

“We try to be safe and also win whole GC with Tadej and bring it home.”

Pogačar’s crushing dominance notwithstanding, a key theme of this year’s Tour of Slovenia has been teamwork and the strength of the riders around the two-time Tour de France champion. And with that, a morale that looks sky-high. With the Grand Départ now less than two weeks away – as if we needed any convincing – Pogačar and UAE Team Emirates are looking like a mighty force. 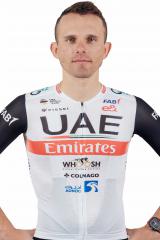