Stephen Williams confirmed his comeback with the biggest win of his career on stage 1 of the Tour de Suisse.

After years plagued by a persistent knee injury, Stephen Williams (Bahrain Victorious) took a surprise victory on stage 1 of the Tour de Suisse on a day where arguably the biggest winner was the race itself.

Some things in life are certain. Death, taxes, and the Tour de Suisse starting with a prologue. But if the finale of the Tour de France can be moved away from the Champs-Élysées, then anything can happen, like the Swiss race organisers tearing up their own road book and kicking things off with a circuit race.

Stage 1 took place on a loop around Küsnacht on Lake Zurich, which included the punchy climbs of Pfannenstiel and Küsnachter Berg. Four laps brought it to 176 km with 2,810 metres of elevation gain, and the promise of an electrifying introduction to a tough week of racing.

Anyone who watched the Giro d’Italia’s stage 14 will have seen Sunday’s stage details and begun salivating at the prospect of anything close to the drama that unfolded in Turin. And while there wasn’t anything close to the destruction created in Italy, the relentless terrain invited some aggressive racing in the finale.

With the breakaway brought back, Neilson Powless (EF Education-EasyPost), Jakob Fuglsang (Israel-Premier Tech), Remco Evenepoel (Quick-Step Alpha Vinyl) and, of course, Stefan Küng (Groupama-FDJ) were all keen to get something moving, and on the approach to the final climb, splits appeared in the speeding bunch.

Bora-Hansgrohe’s Aleksandr Vlasov was the next to go hunting for first-day glory inside the last few kilometres, taking Evenepoel with him, but Geraint Thomas (Ineos Grenadiers) led the remaining contenders in bringing the pair back for a reduced 15-man sprint. Evenepoel hit the front very early, but was swallowed up on the ramp to the line, where Williams edged ahead of Max Schachmann (Bora-Hansgrohe) and Andreas Kron (Lotto Soudal).

“It’s my first big race back since Romandie, and a good month of training,” Williams said. “I was unsure where my form was going to be but I knew I had done the work before this. To win the first stage with a group like that was really special.”

Williams takes a four-second lead into stage 2, which he’ll race wearing the first yellow jersey of the week. It’s a big step forward for the Welshman whose professional career took a few years to grind into gear, plagued early on by a knee injury that eventually required surgery.

“So far, I don’t think it has sunk in yet, to be honest,” Williams said of his first WorldTour victory. “It’s been a pretty strange few years, so to come here and win the stage – I’m over the moon.”

While some survived, even thrived, through the rapid race opener, others will be asking themselves some tough questions. Among those dropped were Dani Martínez (Ineos Grenadiers) and Rigoberto Urán (EF Education-EasyPost) who will have arrived in Switzerland hoping for a smooth and successful tune-up before the Tour. 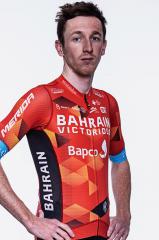