Van Aert thought he had it but didn't account for David Gaudu sneaking up on the outside to win stage 3 of the Dauphiné.

The green hulking frame of Wout van Aert had disappeared, momentarily. The way the first three stages of the Dauphiné had played out seemed little more than a processional march towards a likely Van Aert victory. But after things fell apart on stage two with a lacklustre chase, the Belgian was now missing with a couple of kilometres to go.

His Jumbo-Visma teammate Primož Roglič came to the front, calming proceedings, before Jonas Vingegaard drafted Van Aert right back to the front after the Belgian had drifted. Despite the briefest of flickers the inevitable once again seemed inevitable.

Around the final corner Vingegaard then waggled his elbow and Van Aert was unleashed.

The green jersey’s Red Bull helmet bobbed up and down frantically, pulling back Cofidis’ Victor Lafay who’d had the temerity to try and inch past him.

That French challenger dispensed with, Van Aert sat up on his bike, hands in the air, but far down below on his right-hand side another Frenchman had snuck up and thrown his bike just in time to beat him to the line.

Van Aert’s hands immediately went to his head as David Gaudu (Groupama-FDJ) roared in celebration, the beaten Belgian collapsing back down onto his handlebars.

If Van Aert hadn’t stopped going full throttle and sat up would he have had enough to halt Gaudu? It looked like it would have been close. Van Aert’s early celebration will be what this stage 3 of the Dauphiné is remembered for, but Gaudu sprinted well, coming out of the bigger Belgian’s slipstream at the right moment to sneak what had previously looked an assured victory for Jumbo-Visma as the sprint unfurled.

As a consolation, Van Aert takes back the yellow jersey he lost on stage 2 after the breakaway survived, Alexis Vuillermoz (TotalEnergies) left gasping for air as he attempted in vain to battle the gradient to the finish line and limit his losses to cling on to the race lead.

“It was a rookie mistake,” Van Aert told Sporza. “On such a rising finish you lose a lot of speed when you celebrate. It happened in a split second and David Gaudu came from the other side…it’s just painful.”

“I’ve seen it before with other riders. You sometimes laugh about it but now I’m the loser,” he continued. “I think this is the first time it has happened to me. Or at least in such a big race. When you see it with someone else you always question how it’s possible. Now I understand how they feel. Hopefully it won’t happen a second time.” 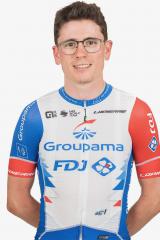