Bob Jungels (AG2R-Citroën) on his way to victory on stage 9 of the Tour de France.

Bob Jungels (AG2R-Citroën) on his way to victory on stage 9 of the Tour de France.

Bob Jungels (AG2R-Citroën) held off his breakaway companions to take a fantastic victory on stage 9 of the Tour de France, the first rider from Luxembourg to do so since Andy Schleck in 2011.

The first Alpine stage of the Tour de France invited a serious battle for the breakaway early on, and it took about 50 km for a strong 21-man group to form. Their number was exactly what you look for in a break that can go all the way, and included luxury stage hunters like Thibaut Pinot (Groupama-FDJ), Pierre Latour (TotalEnergies), Warren Barguil (Arkéa Samsic) and recent Dauphiné stage winner Carlos Verona (Movistar).

However, the presence of Rigoberto Urán (EF Education-EasyPost), 3:24 off the yellow jersey, was a thorn in their side. They were never allowed a significant gap, and with Jonathan Castroviejo (Ineos Grenadiers), Brandon McNulty (UAE Team Emirates) and Wout van Aert (Jumbo-Visma) all present – the latter scooping up yet more green jersey points along the way – the potential for a GC race was very much still in play.

With UAE Team Emirates setting the pace in the peloton, Bob Jungels attacked the breakaway on the Col de la Croix and quickly found half a minute. Simon Geschke (Cofidis) joined him briefly, snatching maximum KOM points to put him in the jersey, but left the Luxembourger to it on the descent with 60 km to go. With the GC threats jettisoned, the stage was flipped on its head, and suddenly the breakaway was in with a chance.

Jungels had found around two minutes over his breakaway companions by the foot of the Pas de Morgins with 25 km to go, the main bunch a further 1:15 or so down the road, where Pogačar’s team was content to maintain a steady pace.

As Jungels climbed ever closer to France, Thibaut Pinot attacked the dwindling breakaway-cum-chase group, which was closer to the peloton than the leader on the road. But Pinot was feeling fresh and in his element, and he attacked hungrily into the gap, leaving Castroviejo and Verona in his wake, Urán among those dropping back to the peloton.

A short descent awaited the leaders after the summit, and then a 4.3 km climb to the finish line. With 5 km to go, Jungels had about 25 seconds over Pinot, who in turn held off Castroviejo and Verona at a further 20 seconds.

Against all odds, it seemed, Jungels was able to find time over the Frenchman behind him and entered the final kilometre with half a minute’s advantage. The man from Luxembourg gritted his teeth and powered up to the finish to take a brilliant stage victory.

Behind him it was heartbreak for Pinot who was overhauled by Castroviejo and Verona, the Spaniards second and third respectively. Just nine seconds after Pinot, Pogačar led the GC race home with Jonas Vingegaard as ever on his wheel, and Geraint Thomas bringing the rest of the group home three seconds later. 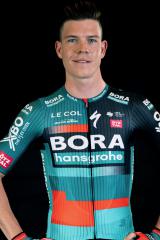