Christophe Laporte is the third Jumbo-Visma rider to win a stage, and the first French victor of the 2022 Tour de France.

Christophe Laporte (Jumbo-Visma) took the first Tour de France victory of his career on stage 19, giving French fans something to celebrate at long last, not to mention giving his team yet another excuse to pop a cork at a phenomenal Tour for the Dutch outfit.

On the last remotely realistic chance for a breakaway, the fight to escape wasn’t as frantic as it might have been, and the peloton let five all-stars go in the first few kilometres: Nils Politt (Bora-Hansgrohe), Quinn Simmons (Trek-Segafredo), Matej Mohorič (Bahrain Victorious), Mikkel Honoré (Quick-Step Alpha Vinyl) and Taco van der Hoorn (Intermarché-Wanty-Gobert Matériaux).

The peloton settled in for the remaining 180 kilometres of the race to Cahors, the threat of crosswinds dictating the shape of the bunch as Lotto Soudal took control for the so-far unlucky Caleb Ewan.

The peaceful progress of the stage was interrupted about 30 kilometres from the start in Castelnau-Magnoac by another protest in front of the peloton – the breakaway was halted 90 seconds up ahead – but the race was underway again after a few minutes.

The breakaway came close to being caught with 125 km to go, but Honoré injected some pace with the bunch just six seconds behind and all but Politt stayed away, leaving four out front. They almost gained Cyril Barthe (B&B Hotels-KTM), but he ran out of gas after reaching within seconds of the leaders.

With the gap a little over half a minute and 53 km to go, Simmons attacked his companions in the narrow streets of the medieval city of Lauzerte. He was joined for a few kilometres by Mohorič, but was left to carry out a solo effort that lasted little more than 10 km. Meanwhile, the peloton was splitting a little in the promised winds, albeit without any significant danger.

The American debutant was caught just over the second and last fourth-category climb of the day, and attacks began to fire without delay on the lumpy, rollercoaster roads beyond the Côte de Saint-Daunès, initiated by Alexis Gougeard (B&B Hotels-KTM). Even Tadej Pogačar saw a chance to get in a move by following a counter-attack, but Wout van Aert had his card marked.

Fred Wright (Bahrain Victorious) and Jasper Stuyven (Trek-Segafredo) joined Gougeard for the descent where the advantage swung in their favour, and with 20 kilometres left to race, their gap was 31 seconds.

A series of roundabouts and a peloton lacking 100% control – Wout van Aert driving the pace as the pure sprinters’ domestiques popped one by one – meant that the breakaway held a tantalising margin all the way to the last 1,400 metres where Christophe Laporte was the first to bridge. But the pace had shredded the peloton and Wright was able to make one last effort under the flamme rouge, gaining a few bike lengths.

But Stuyven clawed back onto the wheel with Laporte shadowing him, and the fresher man, the Frenchman, wouldn’t wait for the final sprint. He attacked a few hundred metres out and had time to celebrate a fantastic first Tour stage win in his eighth appearance, and a long-awaited first French victory of the race.

The GC riders survived the penultimate road stage of the Tour and the standings are unchanged going into the stage 20 time trial. However, Pogačar’s character, race craft and instinct for positioning shone in the finale again, the white jersey getting involved in the sprint and finishing fifth. Provisional standings suggested he’d snatched back five seconds ahead of a split in the pack, but it was later confirmed that time gaps remain the same and his deficit stands at 3:26. 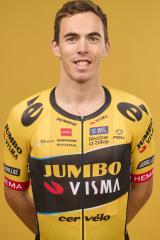