Tom Pidcock (Ineos Grenadiers) on his way to stage 12 victory on Alpe d'Huez at the 2022 Tour de France.

Pidcock took only his second ever road win on stage 12 after going solo with more than 10 km of the Alpe d'Huez still to climb.

Tom Pidcock (Ineos Grenadiers) on his way to stage 12 victory on Alpe d'Huez at the 2022 Tour de France.

Tom Pidcock attacked the breakaway to win stage 12 of his first Tour de France atop Alpe d’Huez, as the GC race waited until the final climb and his teammate Geraint Thomas moved back onto the overall podium, capping off a good day for the Ineos Grenadiers.

Of the early attackers, only five survived to the top of the Col de la Croix de Fer and the last 60 kilometres of the stage, including demon-descender Tom Pidcock (Ineos Grenadiers), Neilson Powless (EF Education-EasyPost), Giulio Ciccone (Trek-Segafredo), Louis Meintjes (Intermarché-Wanty-Gobert Matériaux) and four-time Tour champion Chris Froome (Israel-Premier Tech), who was on his best day since his near career-ending crash at the 2019 Dauphiné.

The breakaway had stretched their advantage beyond seven minutes between the Col du Galibier (from the opposite side to yesterday) and the Croix de Fer as Jumbo-Visma set a steady pace in the peloton. However, the yellow jersey’s team started to wind it up on the second climb of the day, and by the summit, the gap was down under 4:30. As the combined strength of Jumbo-Visma continued to whittle the group down, the break’s chance of going the distance tumbled.

The descent off the Croix de Fer was very long and was followed by a 15-kilometre stretch of flat road before the final climb. Pidcock did his damnedest to distance his rivals on the descent, exceeding 100 km/h at one point, but the rest were wise to his exploits by this point, and the quintet took on the flat run-in together, their advantage nearing six minutes once more.

At the foot of the hors-category Alpe d’Huez (13.9 km at 7.9%), the five leaders held 6:10, their hope for stage glory replenished on the road to the final ascent.

Cohesion broke down on the lower slopes, which ultimately led to Pidcock going on the attack just outside 10 km to go, the gap to the breakaway still well over five minutes. The young Brit put fresh air between him and chasers Meintjes and Froome who was third on the road, and the gaps stayed fairly constant for a few kilometres, a handful of seconds between the first three riders.

Pidcock seemed to draw strength from Dutch Corner, flying through the maelstrom of fans and taking his gap beyond retrieval and making the iconic mountain look easy on his way to a career-defining stage win, jumping back into the top 10 overall in the process, while Meintjes and Froome both hung on for a defiant podium finish.

Meanwhile in the peloton, Jumbo-Visma was still all over the front and mercilessly dropping GC challengers until only Jonas Vingegaard, Tadej Pogačar, Geraint Thomas and Enric Mas were left, with Sepp Kuss last man to set the pace for the last 5 km of the Alpe.

Pogačar tried an attack with Kuss still on the front, but Vingegaard was lightning fast in pursuit, and the group was back together within a few hundred metres. But the two-time Tour champion was unbowed, going again inside the last three kilometres. Vingegaard, though, could not be dropped and the pair shared a wry smile as the rivalry flared. In the end, Vingegaard, Pogačar and Thomas crossed the line together, the new podium after Romain Bardet was distanced on the climb. 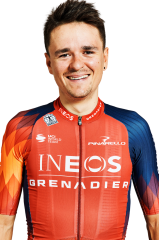