Annemiek van Vleuten (Movistar) crosses the line on stage 10 to wrap up overall victory at the 2022 Giro d'Italia Donne.

Chiara Consonni (Valcar Travel & Service) finished off her home stage race in style, sprinting to an impressive victory in Padova on stage 9 of the Giro d’Italia Donne.

After several riders found themselves out of position in the final sprint, Consonni and Rachele Barbieri (Liv Racing Xstra) went wheel-to-wheel to the line as Emma Norsgaard (Movistar) finished third.

Krista Doebel-Hickok (EF Education-TIBCO-SVB) and Alessia Vigilia (Top Girls Fassa Bortolo) were in the lead for much of the stage and survived almost to the finish, but were eventually caught within the final 4km of racing.

“It’s nice being back,” Van Vleuten said. “After 2020 when I was in the maglia rosa I left the Giro with a broken wrist, so it’s nice to finish it off again in the pink.

“Pink is not my favourite colour, but in the Giro it is. If I’m riding here in it, so many Italian people are saying ‘maglia rosa, maglia rosa’so it’s really special to wear pink in Italy. It’s a big honour for me to take it home again.”

After nine days of racing, three back-to-back mountain stages and the general classification seemingly wrapped up, there was relative calm in the peloton as the final stage got underway. With just one small climb on the otherwise pan-flat route from Abano Terme to Padova, the day looked certain to culminate in a bunch sprint, giving little chance for any breakaway to contend for the win.

As a result, no big flurry of attacks materialised in the opening kilometres of the race. Eva Maria Gatscher (Team Mendelspeck) escaped solo in the first 10km and had a gap of 20 seconds, but with no companion to share the work with, the Italian was caught by the Canyon-SRAM led peloton before the 20km completed mark. On the climb to Revolon – the only categorised climb of the day – Canyon-SRAM set-up former green jersey wearer Elise Chabbey to take maximum points at the top. A final consolation prize for the Swiss rider as she still trailed Kristen Faulkner (BikeExchange-Jayco), who took over the mountains classification lead on stage 8, by ten points.

Though the climb was only minor, efforts from several motivated teams kept the pace high over the top and into the descent and saw a split in the peloton, with a group of around 35 riders briefly going clear of the bunch. Just as things seemed to be regrouping, the attacks began again, first led by Niamh Fisher-Black (SD Worx) and then taken up by the duo of Krista Doebel-Hickok (EF Education-TIBCO-SVB) and Alessia Vigilia (Top Girls Fassa Bortolo). Seemingly happy to let this pair go away, the peloton calmed and the gap quickly grew to a minute as the race entered the final 50km.

Anastasia Carbonari (Valcar Travel & Service) and Francesca Baroni (Aromitalia-Basso Bikes-Vaiano) attempted to bridge to the leaders, but found it difficult to close what had grown to a 1 minute 30 second gap and were soon reabsorbed by the Movistar and DSM-led peloton. Going into the final 30km, the leaders’ advantage was still growing, and so Trek-Segafredo amassed at the front of the peloton in preparation for a hoped-for bunch sprint, where world champion Elisa Balsamo would be looking to collect a third stage victory.

Heading under the 20km to go mark, the gap to the break remained over a minute, but a big acceleration from Canyon-SRAM over the last incline of the day put a dent into the leaders’ advantage which then began to come down more steadily. With the sprint teams lining up in the final 10km, the catch was eventually made with 4km to go.

It was a big battle for position into Padova as Trek-Segafredo, SD Worx and Jumbo-Visma all fought to set their sprinter up for the finale. Turning into the final straight, stage favourites Elisa Balsamo and Charlotte Kool (Team DSM) found themselves out of position and without teammates, allowing the Italian duo of Rachele Barbieri (Liv Racing Xstra) and Chiara Consonni (Valcar Travel & Service) to get a jump on the bunch and go head-to-head to the line. The Valcar rider just edged it in the final metres, taking her first Giro stage victory and capping off the week perfectly for the Italian team. Emma Norsgaard rounded out the podium, whilst Balsamo had to settle for fourth and Kool missed out on the top-10.

With no changes in the GC, Annemiek van Vleuten rolled in safely to secure her third Giro Donne title ahead of Marta Cavalli (FDJ Nouvelle-Aquitaine Futuroscope) and Mavi García. Niamh Fisher-Black wins the best young rider competition for the second year running, whilst Kristen Faulkner will take home the green mountains jersey. The ciclamino points jersey goes to Van Vleuten after her two stage wins.

Annemiek van Vleuten and the peloton will now turn their attention to the Tour de France Femmes at the end of the month, as the Dutch rider looks to pull off an historic Giro-Tour double. 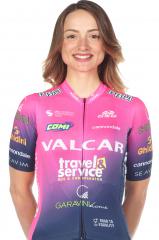 Annemiek van Vleuten (Movistar) crosses the line on stage 10 to wrap up overall victory at the 2022 Giro d'Italia Donne.

Preview: Stages and contenders for the Tour of Scandinavia

Preview: Stages and contenders for the Tour of Scandinavia