Annemiek van Vleuten extends her lead in the overall standings.

The French rider won solo at the summit of Passo Maniva. Annemiek van Vleuten (Movistar) gained a handful of seconds in the GC battle to extend her overall lead.

“It was really hard and I was a bit scared as the gap was going down really fast so I really had to go full from the bottom,’ said Labous.

“I saw that I was maybe the strongest so I just decided to take my own pace and to just go as hard as I could. I will try maybe to go for another stage win but tomorrow I think maybe I’ll be a bit tired from today but I’m just so happy with the win I will first enjoy that one.”

The queen stage of this year’s Giro d’Italia saw riders take on the Passo Maniva and reach the highest finishing point in the 2022 race. Over the last 43 kilometers, the peloton steadily climbed to the summit and tackled 1,400 meters of elevation gain.

The peloton showed no interest in keeping the gap down with the break reaching nine minutes advantage at the base of the Passio Maniva. With Labous the break’s best placed rider on GC at the start of the day at almost 12 minutes behind Annemiek van Vleuten, there was no threat.

BikeExchange-Jayco were forced to work on the front of the peloton with Labous threatening Amanda Spratt’s general classification position. They began to bring the gap down to a slightly more manageable margin.

Amalie Lutro (Uno-X) was the first rider to break the co-operation of the breakaway. The Norwegian jumped off the front with around 20 kilometers to go to the finish.

Christina Tonetti of Top Girls Fasso Bortolo bridged across on the steep section with 10 kilometers left but the rest of the break were now hot on her tail. The peloton was also beginning to catch the break at a rate of knots as the climb got harder and harder.

Cecilie Uttrup Ludwig (FDJ) set the tempo at the front of the peloton for a long time, and with the breakaway now in bits, it was just Juliette Labous out front on her own. Labous continued to hold the gap and even extended it slightly despite the efforts of the peloton that contained only about 15 riders at this point.

Van Vleuten made the first attack from the peloton with 3km to race and it was her podium rivals Mavi Garcia (UAE ADQ) and Marta Cavalli (FDJ) that were the only riders to match the move initially. Elisa Longo Borghini and Gaia Realini were able to bridge over once Van Vleuten finished her accelerations.

Longo Borghini was the next rider to try and attack, which Mavi Garcia used as a springboard. Once again, it was the same trio on the podium who were able to distance the rest until they eased off once more and allowed the former-Italian national champion Longo Borghini back into their group. She did the pace making on the front as she looked to secure her fourth position but Fisher-Black (SD Worx) and Realini (Isolmant) still managed to link up once more.

Van Vleuten finally broke her GC rivals in the last kilometer, attacking over Niamh Fisher-Black’s initial move. Garcia almost on her wheel but losing four seconds and Cavalli six further seconds behind her as well. Behind them, Niamh Fisher-Black all but sewed up the maglia bianca and Gaia Realini proved she is a genuine climbing talent and surely will be on the radar of Women’s WorldTour teams. 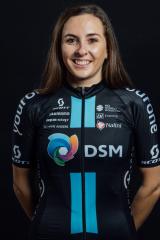