Annemiek van Vleuten remains in the maglia rosa with Marta Cavalli in second.

Kristen Faulkner (BikeExchange-Jayco) attacked on the first climb of the day and survived almost 100km out front and over 3,000 vertical metres to win stage 8 of the Giro d’Italia Donne, her second victory at this year’s race.

Faulkner attacked her day-long breakaway companion Gaia Realini (Isolmant-Premac-Vittoria) on the final climb of the day, and held off the chasing GC riders to secure the win in San Lorenzo Dorsino.

Behind, Marta Cavalli (FDJ Nouvelle-Aquitaine Futuroscope) distanced maglia rosa Annemiek van Vleuten (Movistar) in the finale, but the Dutch woman looks to have the overall victory secured with a over a minute buffer going into tomorrow’s flat finale stage.

“Last year at the Giro I was off the back the whole time, so this year is pretty special,” Faulkner said at the finish. “Two of our riders [Amanda Spratt and Georgia Baker] weren’t able to start yesterday because of Covid, so I just really wanted to put it all out there for them and for the team and give the best show.”

“I’ve learned I can’t predict anything at this Giro,” she said of the final stage. “We have two sprinters in our team, so I’m hoping it finishes in a bunch sprint and best of luck to our sprinters.”

The Giro Donne general classification was to be well and truly decided on stage 8, a huge day of climbing that took in 3,170 vertical metres and the race’s Cima Coppi, the brutal, 10.9% average gradient slopes of the Passo Daone. Though not a mountain-top finish, the stage finished on a short incline and the three big climbs packed into the 113km stage made it a day for the strongest of riders.

With only 10km of flat road before the first climb began – and the terrain would be constantly up and down from then on – the breakaway attempts started straight out of the neutralised zone, though nothing properly stuck on the flat. Starting the Fai della Paganella climb, a large group of around 15 riders briefly got away at the base of the ascent, but were soon reeled back in. Thalita De Jon (Liv Racing Xstra) then escaped solo, and had a small lead, but again was quickly reabsorbed as more attacks and work from Trek-Segafredo kept the pace in the peloton high.

The next big move to go came from stage 7’s day-long escapee Faulkner, accompanied by Realini who climbed to an impressive 7th place on stage 6’s mountain-top finish. A lull in the attacks in the bunch meant the pair built an advantage of almost a minute as they approached the top of the climb.

Behind, the ferocious pace into and up the climb saw many riders struggling, as the peloton shrunk to 50 riders after just 23km of racing. Mountains classification leader Elise Chabbey (Canyon-SRAM) was temporarily distanced, but found her way back to the group.

By the time the race crested the top of the first climb, a very elite selection had already been made in the peloton, with just 20 climbers and GC riders remaining in the group. Ahead, the leading duo stretched its lead to over two minutes on the long descent as the race passed the 35km completed mark. On a flatter part of the descent, Brodie Chapman (FDJ Nouvelle-Aquitaine Futuroscope), Anouska Koster (Jumbo-Visma), Lucinda Brand (Trek-Segafredo) and Erica Magnaldi (UAE Team ADQ) attacked behind, with Chapman and Magnaldi perhaps more aiming to give their leaders Cavalli and García an easier ride than trying to bridge to the front.

The situation stayed stable up and over the second climb to Duron, with Faulkner taking maximum QoM points at the top, enough to put her in the virtual green jersey lead with just one more categorised climb to come. After the descent from Duron, Magnaldi and Brand tried to push on from the chasing group, but struggled to definitively distance Chapman and Koster as the pursuers came within two minutes of the leaders for the first time.

Approaching the base of the Passo Doane, SD Worx took up the chase in the maglia rosa group in support of best young rider Niamh Fisher-Black. It was Mavi García (UAE Team ADQ) who then set the pace in the early slopes of the climb, not fully attacking but forcing riders to close the gap to her wheel. When Cavalli took up position on the front, the group began to split with Juliette Labous (Team DSM), Chabbey and Uttrup Ludwig (FDJ Nouvelle-Aquitaine Futuroscope) all dropped.

As has become emblematic of this race, it was the trio of Van Vleuten, Cavalli and García who emerged as the strongest, though García would soon be distanced. Van Vleuten and Cavalli swept past the splintering chasing group, with Chapman giving Cavalli a brief turn on the front before the Australian was dropped. With two kilometres left of the climb, Van Vleuten and Cavalli remained two and a half minutes down on the leading duo, but the gap was shrinking.

In the final 1500m of the climb, Faulkner attacked Realini and reached the top solo, two minutes ahead of Van Vleuten and Cavalli with only a descent and some minor climbing on the 23km before the line. On the descent, Cavalli went on the offensive and distanced Van Vleuten, with the maglia rosa perhaps cautious after a small crash on the downhill yesterday.

Though Cavalli was at one point around 20 seconds ahead of Van Vleuten, the Dutch rider made the catch as the road began to rise again, and the pair were joined by Elisa Longo Borghini (Trek-Segafredo). The trio caught Realini with 15km to go, leaving Faulkner 1 minute 48 seconds ahead going into the finale, looking strong but outnumbered by the GC chasers.

As well as the fight for the stage win up front, the battle for the podium was playing out between group 2 and group 3 as García tried to limit her losses to fourth-placed Longo Borghini and hold onto her spot on the podium. Longo Borghini attacked the maglia rosa group going into the last 3km of the stage, taking Cavalli with her in the hunt for time over García while Faulkner looked locked-in to win the stage.

With still over a minute advantage heading into the finishing town of San Lorenzo Dorsino, Faulkner was able to enjoy her victory, her second of the race after winning the opening time trial in Sardinia. Having won maximum points on all three categorised climbs, the American also secured the green mountains jersey after her breakaway efforts yesterday and today.

Cavalli finished second on the stage, 15 seconds ahead of Van Vleuten but not enough to overhaul the Dutch rider on GC, who has nearly two minutes advantage going into tomorrow’s final flat stage.

Longo Borghini picked up third and took back a significant amount of time on García, but remains in fourth overall, 49 seconds behind the Spaniard. Fisher-Black remains in the white jersey, and Van Vleuten retains the ciclamino jersey.

With just one category 3 climb on an otherwise flat profile on stage 9, tomorrow is expected to come down to a sprint with little change in the GC possible on the road between Abano Terme and Padova. 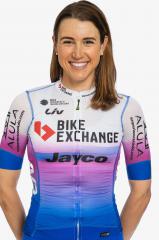