Stage 3 was won by Dylan Groenewegen in a photo finish over Wout van Aert who took second place for the third day in a row.

Dylan Groenewegen (BikeExchange-Jayco) took an emotional victory on stage 3, bringing his Tour de France stage tally up to five (six including TTT) after three years away.

The Tour’s last day in Denmark saw a rare solo breakaway, which would usually spell tedium for the fans, and a bonus recovery day for the peloton with no risk up the road. Today though, the lone ranger was stage 2’s star player Magnus Cort (EF Education-EasyPost) who, now resplendent in polka dots, went after the day’s trio of Cat. 4 climbs amid roaring Danish fans, ensuring one last podium celebration on home soil.

With his job done, Cort was re-absorbed by the peloton a little outside 50 km to go and with a slight threat of wind, the sprint teams carefully and calmly maintained control.

There was a nervous crash just outside the last 10 kilometres after a bit of a squeeze near the front rippled through the peloton. A few small groups were left chasing several seconds down, including Rigoberto Uran (EF Education-EasyPost) for the second day on the trot, but the favourites for the stage were unaffected.

Quick-Step Alpha Vinyl asserted themselves on the front of the bunch in the last three kilometres, and though stage 2 winner Fabio Jakobsen found himself out of position through the last left-hander, his team stayed on the front.

With Michael Mørkøv leading the group, Race leader Wout van Aert (Jumbo-Visma) was first to open up, but a flat-out surge to the line resulted in a photo finish between the yellow jersey, Jasper Philipsen (Alpecin-Deceuninck), and sandwiched between them, Groenewegen whose bike throw just nudged him ahead.

It’s the Dutchman’s first Tour stage win since his last appearance at the race in 2019, and is a huge result for his new team BikeExchange-Jayco.

Van Aert meanwhile may be feeling his patience stretched to near breaking point with a third runner-up finish from three stages, but he does at least extend his lead in both the yellow jersey and points classification. 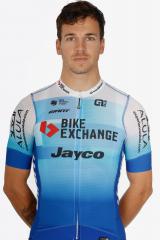