Philipsen won his first Tour de France stage on the same finish he finished third behind Mark Cavendish in 2021.

Stage 15 looked like being the closest the 2022 Tour has come to a good old transition day: small breakaway, long distance, sprint at the end. But if there’s one thing that’s reigned over this year’s Tour de France, it’s tension. And it was no different on the roads to Carcassonne.

By this year’s standards, the fight for the breakaway was very tame. Nils Politt (Bora-Hansrgohe) was the first to go, followed by Wout van Aert (Jumbo-Visma) and soon countered by Mikkel Honoré (Quick-Step Alpha Vinyl). The teams of the sprinters – starved of opportunities thus far – were quick to take control and let a small gap grow. Then after about 35 kilometres, Van Aert dropped back to the peloton, presumably realising his chances were better from the bunch than such a small breakaway, not to mention his role as domestique – a role that was about to become a significantly heavier burden.

After bidding farewell to Primož Roglič before the start, Jumbo-Visma’s day was about to go from sad, to bad, to worse. With two riders on a short leash, it seemed fairly controlled in the peloton, but the pace was high and there were a number of crashes. The worst of them involved Wout van Aert and Steven Kruijswijk, the latter forced to abandon, and was followed just a few kilometres later by an incident for the yellow jersey himself. Vingegaard and teammate Tiesj Benoot were soon back up and riding with no obvious injuries, besides the race leader finding himself two teammates poorer in a matter of hours.

The two-rider breakaway was caught outside the last 50 km and attacks began immediately. Alexis Gougeard (B&B Hotels-KTM) and Benjamin Thomas (Cofidis) got a gap over the third-category Côte des Cammazes where a number of favourites were dropped, and there was no let-up in the pace for the remainder of the stage.

Benjamin Thomas was the last to be caught by the charging peloton, which only retrieved him inside the final kilometre, and a frantic bunch sprint was finally allowed to unfold. Having been relentlessly tapping at the door of victory, Philipsen was able to reward the work of his Alpecin-Deceuninck teammates as he went toe to toe with Wout van Aert and Mads Pedersen (Trek-Segafredo) in second and third respectively.

The GC competition is unchanged as the Tour goes into its final rest day, but the potential for a spectacular final week has taken a massive boost due to the misfortune suffered by Jumbo-Visma, with Vingegaard and Pogačar now with an equal number of teammates. 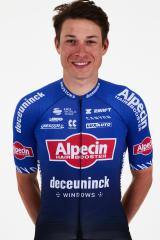