Mads Pedersen attacked from the gun on stage 13, making it into the breakaway and taking a third victory for Denmark in four days.

Mads Pedersen (Trek-Segafredo) out-kicked his breakaway rivals in a three-up sprint to win stage 13 of the Tour de France, as the peloton endured a nervous day on rolling roads from Bourg d’Oisans to Saint-Etienne.

Stage 13 was a difficult one to predict. Its flat finish offered hope to the sprinters who’ve had remarkably slim pickings so far this Tour, but the 192.6 kilometres of lumpy terrain and chance of crosswinds favoured a breakaway.

The teams of Caleb Ewan and Jasper Philipsen, though, were determined to hold the leaders in an iron grip and the gap was not allowed much over two minutes. However, the day swung back in favour of the breakaway when the Lotto Soudal train came a cropper on a fast corner and Ewan crashed hard, leaving only Alpecin-Deceuninck to control the peloton. Fabio Jakobsen meanwhile was suffering in the heat, so Quick-Step Alpha Vinyl was focused more on survival than going after stage victory.

The advantage bounced out over three minutes as the GC teams took over and settled things down. But loathe to let it go, BikeExchange-Jayco came forward to work for Dylan Groenewegen, seeing a golden opportunity to bring it to a reduced sprint. They got no help though and the combined efforts of Jack Bauer and Amund Grøndahl Jansen couldn’t match the team time trial underway up ahead.

At 20 km to go, the gap got stuck at around 2:15 and BikeExchange-Jayco called it off about 14 km from the finish.

Moments after the peloton applied the brakes, Mads Pedersen attacked from the back of the breakaway on a slight rise. Only Fred Wright and Hugo Houle could close the gap, and the trio worked hard to distance their rivals who they could not afford to allow back into contention.

The leaders kept throwing punches at each other deep into the final three kilometres, Wright and Houle desperate to drop the superior sprinter, but they stayed together for the finale. Houle led them under the flamme rouge and Pedersen was perfectly placed to take the win, a third victory for Denmark in four days.

Wright took second from Houle who seemed happy just to make the podium, and it was a rare day off for the peloton which rolled home almost six minutes later. 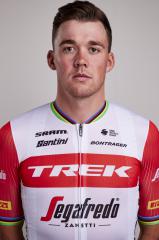