The Australian overcame being dropped on the final climb to take arguably the best win of his career on stage 14.

Michael Matthews (BikeExchange-Jayco) took victory on stage 14 of the Tour de France after attacking his breakaway companions over 50 km from the finish and showing magnificent fighting spirit to stay in the game on the final climb.

Stage 14 got off to a chaotic start, even Tadej Pogačar getting amongst it in the most frantic and aggressive opening phase we’ve seen at the Tour so far. Momentarily caught out with a dearth of teammates, Jonas Vingegaard was forced to follow the moves of his arch-rival with the help of MVP Wout van Aert, and mercifully things settled down after 40 kilometres.

A 23-strong breakaway finally snapped the elastic as the peloton allowed dropped riders back into the fold, and the gap bounced out to the highest yet at this race – nudging 15 minutes in the last 25 km.

There was an air of foreboding between the start and the impending finale on the punchy Montée Jalabert (or Côte de la Croix Nerve), and after an uncharacteristically scrambled first few kilometres, Jumbo-Visma took a stern hold on proceedings. All the while, another Pogačar attack was inevitable, it was only a matter of when.

With the gap over 11 minutes and more than 50 km still to go, Michael Matthews moved the race for the stage into its final phase with a huge acceleration. There was a flurry of activity behind him and he was eventually joined by Andreas Kron (Lotto Soudal), Luis Leon Sánchez (Bahrain-Victorious) and Felix Großschartner (Bora-Hansgrohe).

A terribly timed front tyre blowout robbed Kron’s chance of taking a fourth Danish stage victory in five days, leaving just three out front, but a re-forming behind – not to mention the sweltering conditions – brought the gap within closing distance at the foot of the final climb.

Matthews proved the best of the leaders despite having done most of the work and, detecting weakness in his companions, the Australian attacked on the lower slopes of the Montée Jalabert. As the chasers consumed the gap, overhauling Sanchez and Großschartner, Matthews dug in.

It was almost devastation at the last as Alberto Bettiol (EF Education-EasyPost) caught and passed the BikeExchange-Jayco rider, but Matthews – already awarded the day’s combativity award – slowly worked his way back to the Italian. He barely took a breath before kicking hard and convincingly dropping Bettiol, giving himself plenty of time to enjoy the ride onto the runway for arguably the most magnificent win of his career.

The GC race arrived at the final climb about 13 minutes after the breakaway, and the inevitable attack from two-time Tour champion Pogačar came soon after. By that point, Vingegaard was on the back foot as far as teammates was concerned, but all he needed to do was hold on to the wheel, and his grip was vice-like. The top two on GC left their challengers in pieces all over the climb, but remained inseparable all the way to the finish line.

The gap between one and two stays the same, but there’s movement behind as third through ten all lose around 20 seconds apiece, while Louis Meintjes (Intermarché-Wanty-Gobert Matériaux) leaps up to seventh overall after spending all day in the break.

Another of the day’s storylines was unfolding a long way further back as, after crashing yesterday, Caleb Ewan (Lotto Soudal) clawed his way through 180 kilometres of the 192.5-km stage, tailed by the broom wagon. He was joined by a few teammates after a short while, and with their help he made it to the finish inside the time limit. 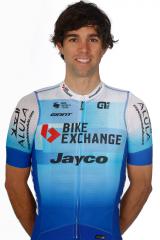