Fabio Jakobsen (Quick-Step Alpha Vinyl) takes his maiden Tour de France victory on stage 2 of the Tour de France. It’s a redemptive result for a variety of reasons, but none more so than the comeback it seals after a crash left the 25-year-old fighting for his life almost two years ago.

It’s 696 days since August 5, 2020 when Jakobsen was sent careening into the barriers on stage 1 of the Tour of Poland. His injuries were frightening and the challenge before him was about so much more than racing a bike. But against all odds, he has made a triumphant return to the highest level of the sport.

Since his comeback appearance at the Presidential Tour of Turkey last April, Jakobsen has taken 18 wins to bring his overall tally up to 36, including three at the 2021 Vuelta a España. It was there that he proved he was well and truly back, and his team Quick-Step Alpha Vinyl indicated early in 2022 that it was him who would travel to the Tour this July instead of reigning green jersey Mark Cavendish.

This is the 25-year-old’s third Grand Tour appearance and only his first Tour de France, but there’s no doubt Jakobsen is where he’s meant to be.

His 36th career victory came at the end of a nervous first road stage. Although mercifully dry and sunny after Friday’s time trial, there was a risk of wind in the last 50 or so kilometres of the route to Nyborg, nowhere more so than over the Great Belt Bridge.

With Magnus Cort (EF Education-EasyPost) celebrating a sweep of KOM points which guarantees him the first polka-dot jersey of the race, the peloton just had to stay safe on the coastal roads, barely a metre of the verge free of Danish fans.

Sven Erik Bystrøm (Intermarché-Wanty-Gobert Matériaux) was the last man standing from the breakaway – he and Cort had been joined by Pierre Rolland and Cyril Barthe (B&B Hotels-KTM) until the first categorised climb – and the Norwegian was left to dangle until a little over 30 km to go, about 10 km from the danger zone.

As reports filtered in of a windspeed approaching 50 km/h on the suspension bridge, the tension in the peloton lifted with the pace, GC and sprint teams alike feeling the pressure.

In the end, it wasn’t so much echelon action that spiced up the bridge, but a crash in the bunch knocked down yellow jersey Yves Lampaert and held up vital lead-out rider Michael Mørkøv (Quick-Step Alpha Vinyl) about 20 km from the finish. A furious chase ensued, but the direction of the wind (from the front) and the reinforcement of Mikkel Honoré made their job a little easier, and they were soon back into the fold.

From then on, it was relatively uneventful for the remainder of the exposed section. The incident with the biggest impact had come in the especially nervous approach to the bridge, Rigoberto Uran (EF Education-EasyPost) one of a small number to hit the deck. The Colombian was already over a minute down, and he had an almost 15 km chase ahead of him.

The drama was not over yet though, a big crash bringing the vast majority of the peloton to a stop inside the last three kilometres. However, most of the favourites for the stage were safe and a frantic sprint played out as expected.

Mads Pedersen (Trek-Segafredo) was put in a very good position, but it was Jakobsen whose team overcame their earlier bad luck to deliver their sprinter to a maiden Tour de France victory. Wout van Aert (Jumbo-Visma) took yet another second-place finish to scoop more green jersey points and take over the yellow jersey, while local man Pedersen settled for third. 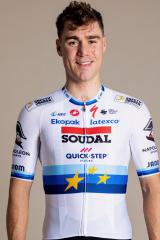