From no contract to Tour de France stage win, Simon Clarke takes an emotional win as cobbles cause chaos for GC favourites.

Simon Clarke (Israel-Premier Tech) took an incredible victory from the breakaway on stage 5 of the Tour de France as many GC favourites had a disastrous day on the cobbles.

Chaos reigned on stage 5 as the peloton took on 157 kilometres and 11 cobbled sectors on the way to Wallers-Arenberg. A six-man group got away fairly early on after a short but more aggressive battle for the breakaway than we’ve seen so far this race. Ultimately it proved one of the most important moments of the race, at least so far as the victory was concerned.

There was the usual mayhem that you’d expect over pavé, punctures, spills and hold-ups, but it wasn’t until the last 50 kilometres when the race really blew up.

Ben O’Connor (AG2R-Citröen) was one of those caught out after a puncture, but no one was more unlucky than Jumbo-Visma. The ‘strongest team in the race’ suffered disaster after disaster as first Wout van Aert crashed early in the stage, then Jonas Vingegaard went through a farcical bike change around 35 km from the finish. There was small relief that Primož Roglič remained up front, but then he too was caught up in a road-furniture related incident, and was left chasing alone with his teammates massed around Vingegaard, including Van Aert who’d dropped back to help.

Tadej Pogačar meanwhile was alone, but he didn’t need anyone, apparently completely immune to bad luck. And with the Ineos Grenadiers leaders also caught behind a split and Jumbo-Visma all over the place, the two-time Tour champion saw his chance to gain some time.

With the breakaway brought inside a minute, Jasper Stuyven (Trek-Segafredo) went on the attack in the reduced peloton, and Pogačar leapt onto the Belgian’s wheel. The pair rode hard together and gained some time, but they were a little too far behind the leaders who had their own golden opportunity.

Neilson Powless (EF Education-EasyPost) found himself in a tricky position, knowing full well that he had a chance of taking yellow, but he was riding to the line with three superior sprinters. Edvald Boasson Hagen (TotalEnergies), just seven seconds behind Powless overall, was leading out when Powless tried to take them by surprise under the flamme rouge, but the American went pop about 400 metres from the line and it came down to a sprint between Clarke and Taco van der Hoorn (Intermarché-Wanty-Gobert Matériaux).

The photo revealed that the 35-year-old Australian had snatched it with a well-timed bike throw and Clarke disintegrated after the finish, unable to believe it himself.

But the stage was far from over, as Pogačar crossed the line with Stuyven 51 seconds later and awaited his rivals. Remarkably, the peloton, which had grown from splintered groups on the run-in, only finished 13 seconds after the young Slovenian. Van Aert played a big part in the chase with the dual objective of protecting Vingegaard and his own grip on the yellow jersey, which he holds onto by 13 seconds over Powless.

The biggest losers of the day were Jack Haig (Bahrain Victorious) who was forced to abandon, and Roglič who finished in a group 2:59 down. We’d learn after the stage that the Jumbo-Visma rider had dislocated his shoulder in the crash. 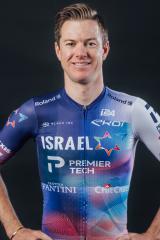