A chaotic day on the gravel ended with the biggest win of Reusser's career.

The Swiss rider attacked with 23km to go on the key gravel stage of the race and built up an advantage of over a minute on the final set of climbs before holding off the chase to take a well-deserved and impressive win.

Ahead of the final climb a group of four riders kicked clear and remained ahead of the GC group of favorites all the way to the line with Évita Muzic (FDJ-SUEZ-Futuroscope) taking second place ahead of Alena Amialiusik (Canyon SRAM Racing) and Veronica Ewers (EF Education-TIBCO-SVB).

“We did it. The team had the plan to make a hard race and not let it come down to an easy final. We said to attack and one would go, and I lucky it was me,” Reusser said at the finish.

“We have our GC leaders, and we always keep them at front. This team is always aggressive and open race strategy, so everyone is capable of winning a stage if it’s possible. Today I was the lucky one who could go, and I am very grateful. I think every day is so far in this Tour. This stage suits the kind of rider that I am, it was hard, but not harder than other stages. I don’t know if this is the best. For sure it is super good.”

Reusser’s win came down to a well-timed attack between the sectors of gravel. She attacked just as a the pace of the race eased and quickly built up a steady advantage. Reusser was no threat to the GC riders, staring the stage over five minutes down and as the race stagnated at several points the 30-year-old kept the pressure on and made use of SD Worx strength in numbers.

Marianne Vos (Team Jumbo Visma) finished in the main group at 1:40 and retained her overall lead in the race with a 16 second lead over over Silvia Persico (Valcar – Travel & Service) and Katarzyna Niewiadoma (Canyon SRAM Racing).

After a number of early attacks a group of three containing Coralie Demay (St.Michel Auber 93), Laura Asencio (Ceratizit-WNT) and Valerie Demay (Liv Racing Xstra) moved clear with just over 80km remaining. The trio build up a lead of almost two minutes as they hit the foot of the first climb of the Côte de Celles-sur-Ource.

The pace at the front of the peloton increased dramatically as the climb came into view, with the gap to the break dropping by 30 seconds and with Coralie Demay slipping back to leave two leaders.

As soon as the short climb was finished the riders turned onto sector 4, the first of four sectors with Movistar setting the pace for team leader Annemiek van Vleuten. SD Worx then hit the front with leader Demi Vollering looking to position herself near the front and out of trouble. The first sector caused little trouble for either the remaining two leaders in the break or the GC riders and with 50km to go the race hit the second climb of the Côte du Val des Clos with the break still 1:11 ahead.

Coralie Demay used the 15 percent slopes to drop her last remaining companion from the break as Lotte Kopecky was surprisingly dropped from the chase group. That didn’t stop SD Worx from continuing on the front with the peloton reduced to less than 30 riders ahead of sector 3 of gravel roads.

Van Vleuten, who was looking to bounce back from losing time on stage 3 due to illness, was forced to unclip after colliding with another rider as up from Reusser hit the front as she looked to keep the pressure on for Vollering.

With 38km to go Demay had just 34 seconds of an advantage left, with Kopecky chasing back to the yellow jersey group to give SD Worx a full quota of riders.

Demay was caught on the second sector, the longest of the race at 4.7km, but as the bunch strung out a number of mechanical began to hit the race favorites. Stage 3 winner Cecilie Uttrup Ludwig was forced to change bikes after a puncture but was well-paced by her team and connected with her rivals before the end of the sector.

Mavi Garcia also had to change bikes as up front Reusser once more dictated the tempo. Vollering and Ellen van Dijk swapped turns on the front before Katarzyna Niewiadoma had her own mechanical that forced Canyon to drop back and assist its team leader.

As the race hit the Côte de Maître Jean only 17 riders remained in contention and over the top Reusser attacked. The SD Worx rider quickly built up a lead of nearly 30 seconds. By the time she reached the foot of the next climb of the Côte de Vitry the gap had gone out to almost a minute. The final gravel sector saw little action from the GC favorites with Vos forced off the road at one point and Garcia suffering her second mechanical of the stage. Van Vleuten and Elisa Balsamo then had flats before Garcia was knocked down by her own team car shortly after the sector.

Amialiusik attacked from the yellow jersey group and was chased down by Muzic and then Ewers but once more there was little desire from the GC favorites to put each other under pressure. 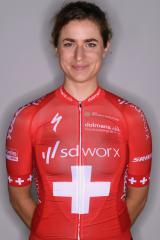 'I just couldn't stop smiling:' When riders needed a lift, Femmes fans were there

'I just couldn't stop smiling:' When riders needed a lift, Femmes fans were there

The moments that defined the inaugural Tour de France Femmes