Sam Bennett (Bora-Hansgrohe) wins stage 3 of the 2022 Vuelta a España.

It was a perfect day for Bennett and Bora-Hansgrohe who executed their plan perfectly, delivering the green jersey to back-to-back wins. Sam Bennett (Bora-Hansgrohe) took back-to-back stage wins in the Netherlands, holding off Mads Pedersen (Trek-Segafredo) and Dan McLay (Arkéa-Samsic) on a stage that was almost a carbon copy of Saturday’s first road outing of the 2022 Vuelta a España.

“It wasn’t a hard day watts-wise, but there were a lot of accelerations out of the corners all the day, a really nervous day,” Bennett said post-stage. “Again, the job they did in the final … Jonas [Koch], even though he was riding all day, came back and did another big turn. Ryan [Mullen] kept us up there, taking so much wind, and then Danny (Van Poppel] … it was a masterclass.”

Before the stage got underway, the four jersey wearers lit a candle in Breda’s Grote Kerk for the victims of COVID-19, then led the peloton out of the church to begin the long neutral section.

From there on, the stage took on a very familiar shape. Even the profiles of the first two road stages were hard to separate – both almost pan flat with a fourth-category “climb” in the latter half – and the storyline of Sunday’s stage carried no surprises.

One of the few differences between the first two road stages was that Tim Merlier’s Alpecin-Deceuninck found allies in Trek-Segafredo and Bora-Hansgrohe throughout stage 3. Though the 193.2 km route looked to be about as predictable as they come, the strong seven-man breakaway cultivated a seed of doubt in the minds of the sprint teams, who made sure to keep Thomas De Gendt (Lotto Soudal), Jan Bakelants (Intermarché-Wanty-Gobert Matériaux), Julius van den Berg (EF Education-EasyPost) et al. on a tight leash. The threat of wind also led to some nervous riding, but it was neither strong enough nor in the right direction for it to have a serious impact on the stage.

The peloton left the escape to sweep up the intermediate sprint points before gathering them up a little over 11 kilometres from the line, and it was a textbook finale. With the GC teams out of the way in the last few kilometres, Alpecin-Deceuninck and UAE Team Emirates sent fresh bodies to the front to dictate the run-in, but the Bora-Hansgrohe pairing of Danny van Poppel and Bennett were ready to roll out another perfectly executed leadout.

“It was quite hard because I think a lot of people were fighting for our wheel,” Bennett said. “I think it is just a natural flow that people start to go up beside me and squeeze me off, so I had a few tough moments just to hold Danny’s wheel. So it was quite a hard fight.”

Just like stage 2, it was an agonisingly long drag race to the line, Bennett flanked by Pedersen and McLay, their positions relative to one another staying fixed for the last hundred metres. The Irishman held firm to take a second consecutive stage win as Pedersen kept Arkéa-Samsic’s British sprinter at bay to double up on second-place finishes.

“For it to happen two days in a row was quite nice. This is confidence boosting, for sure.”

With Bennett extending his lead in green, the red jersey changed hands again as Jumbo-Visma continues to share the spoils of their stage 1 success. As the Vuelta ended its trip to the Netherlands, the race lead was passed from Mike Teunissen to their Italian TT specialist Edoardo Affini.

There were a few unfortunate incidents for a couple of GC contenders on the Dutch roads. Michael Woods came off far worse, the Canadian becoming the second rider to abandon the Vuelta after a crash left him with a concussion and several abrasions. Then the Ineos Grenadiers were forced into a slightly nervous chase with 20 km to go, Richard Carapaz, Pavel Sivakov and Carlos Rodríguez all held up through some road furniture after the Ecuadorian hit a cone. All three got safely back to the peloton though, and Carapaz even had a laugh about the hiccup when he arrived at the team bus. 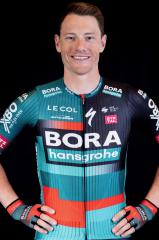 Sam Bennett (Bora-Hansgrohe) wins stage 3 of the 2022 Vuelta a España.