Amber Kraak took second behind the Spanish national champion with Grace Brown rounding out the podium. In bike racing, it’s not always the strongest rider who wins the race but Spanish national champion Mavi García was, without doubt, the strongest in the peloton at Classic Lorient Agglomération- Trophée Ceratizit. The UAE Team ADQ rider threw down attack after attack until it was only herself and Amber Kraak left. García comfortably took the two-person sprint, with Grace Brown leading in the chasing group to take third.

An interesting line-up and new course led to an aggressive and unpredictable edition of Classic Lorient Agglomération-Trophée Ceratizit. Attacks flew from the beginning, and the race maintained a high pace as a large group made their way off the front of the peloton early on. With the potential of a reduced bunch finish, teams with quick sprinters kept the group close, but once it was caught the attacks became uncontrollable.

An acceleration from García forced a group of 14 to ride clear and with all the top teams represented, the chase quickly evaporated from the peloton behind.

Rider after rider attacked in the final 11 km lap, and the front group, comfortably away from the peloton by this point, slowly lost riders. Nine remained as the race approached the final 3 km.

García gambled and threw down one last attack inside the final 1.5 km. Kraak followed and the group behind stalled. 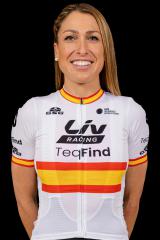