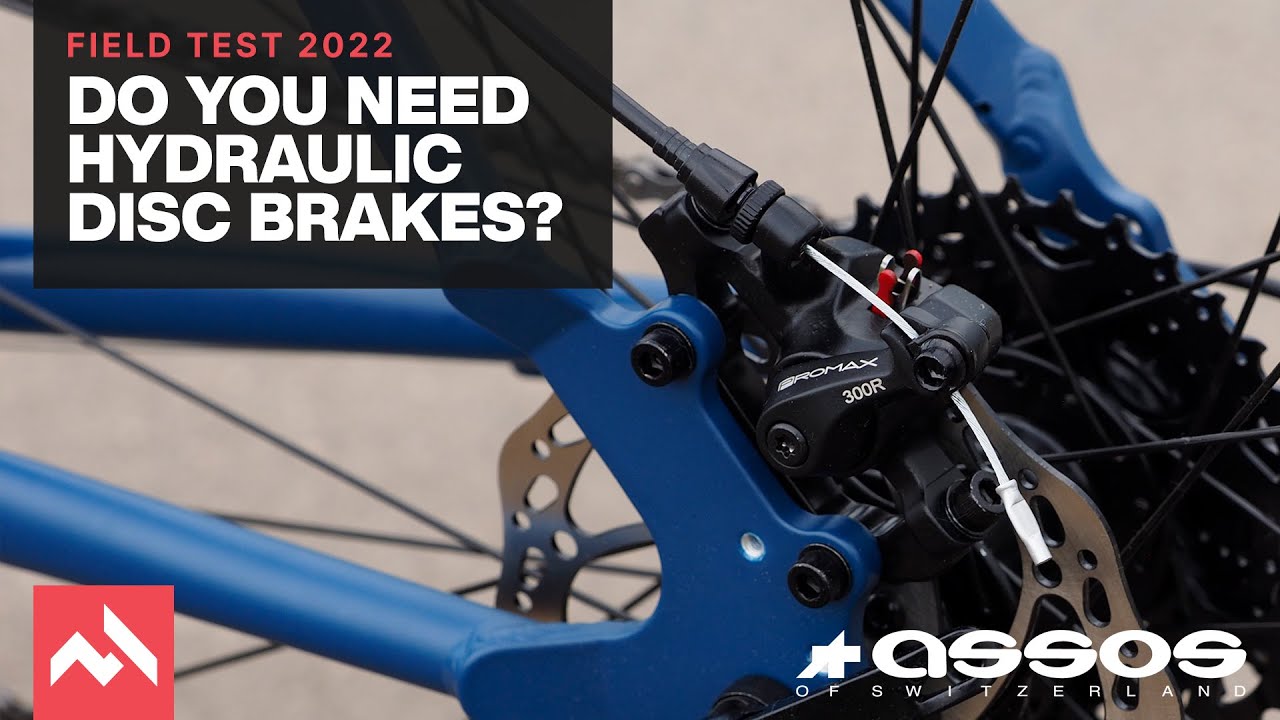 The disc vs. rim debate is a done deal. But hydro vs. mechanical? There’s some nuance there, especially at lower price points.

The bicycle industry has long ago settled the so-called debate on disc brakes vs. rim brakes. Aside from a tiny handful of high-end options — usually custom, at that — disc brakes have taken over the drop bar world entirely, even at lower price points. But at those lower price points, there’s another debate: hydraulic vs. mechanical disc brakes. And it’s not quite as cut-and-dried a situation as some might think, as we learned firsthand at this year’s Field Test.

By and large, fully hydraulic disc brakes are the undisputed winner in terms of performance. They’re more powerful, they offer finer control, and they’re usually lighter. Much of that performance advantage comes about simply because of how efficiently they transfer force from the lever to the caliper.

The critical aspect of hydraulic disc brakes is the fluid itself. Regardless of what the liquid actually is — almost always either some kind of mineral oil or automotive-grade DOT brake fluid — the key is that the fluid is non-compressible, and that it travels through a hose that doesn’t expand under pressure (or at least expands only minimally). Because of that, when you push the a certain volume of fluid through the master cylinder at the lever, that exact same volume of fluid is transferred to the caliper at the other end. Put another way, there’s virtually no “signal degradation”.

A hydraulic hose also doesn’t really generate friction like a traditional cable-and-housing system, either, and it’s far more tolerant of tight bends. And because the system is sealed, it’s inherently impervious to weather. Moreover, the so-called “open” hydraulic systems typically used self-adjust for pad wear, so once everything is initially dialed, they’re — at least in theory — set-and-forget systems that require almost no short-term maintenance.

At this year’s Field Test, all of the testers commented on the superior performance of hydraulic disc brakes on every bike that had them, just because they obviously worked so much better. More power, less hand effort, more confidence.

Sounds like an open-and-shut case, no? Not so fast.

Note that I said “in theory” about the regular maintenance. In practice, the tight tolerances required between the caliper pistons and the seals in the body can be prone to contamination, which then leads to sticky pistons that don’t want to retract like they should, and pads that annoyingly rub on the rotor. And those recommended annual system bleeds require special tools that not everyone will want to buy, not to mention the mess and hassle of dealing with hydraulic fluids.

Hydraulic brake caliper pistons also don’t move all that far, so the gap between the pads and rotor are usually very tight — often just 0.5 mm or so on either side. As such, getting things dialed in just right isn’t always an easy task (and the often poor tolerances on production bikes only makes that harder).

And what happens if you’re out in the field somewhere and your hydraulic brake springs a leak? Well, again, the key to a hydraulic brake system is the non-compressible nature of the fluid. If air gets into the system, that air is a gas, and since gas is compressible, now instead of efficiently transferring force from the lever to the caliper, all you’re doing is squishing a bunch of air somewhere instead of getting those caliper pistons to squeeze the rotor. Not great, particularly if you can’t easily gain access to the specific bleed kit or parts that you need.

Given all of that, it sounds like mechanical disc brakes might make a lot of sense — and to be clear, they certainly do, depending on your situation. But then again, while hydraulic disc brakes most certainly produce a heck of a lot of power, not everyone needs that much power, and not everyone is willing to deal with some of the (albeit infrequent) headaches of hydraulic systems.

There are a few different varieties of mechanical disc brakes, but they generally all work on similar concepts. Just like with traditional rim brakes, the levers pull a wound steel cable through a housing. That cable then pulls on some kind of lever arm at the caliper, which then pushes the brake pad(s) into the rotor, usually via some kind of internal ramp mechanism.

Essentially, a mechanical caliper is conceptually the combination of two simple machines: a lever and a screw. It’s easy to understand, straightforward to work on, there’s no fluid to deal with, there’s often more pad clearance than you find on hydraulic setups, and with the exception of a couple of niche high-end models, they’re quite inexpensive, too. Got a failure in the field? Oftentimes, it’s an easy fix with basic tools and easily sourced spare parts.

Ok, so then if you’re shopping for a more value-oriented bike, then mechanicals are the way to go? Well, once again, it’s not quite as straightforward as that.

Hydraulic disc brakes vary greatly in terms of things weight and lever feel, but with few exceptions, they generally all produce a lot of power. Even inexpensive hydraulic brakes — like the lower-end Tiagra calipers on the Marin Nicasio 2 — usually work extremely well. But that’s not always the case with mechanical setups, as we discovered all-too-well at this year’s Field Test.

Some mechanical calipers work quite well, such as the Tektro MD-C550s on the Salsa Journeyer we tested. It’s a more advanced mechanical caliper that moves both pads simultaneously for more symmetrical force application. They required more lever force for a similar amount of stopping power as compared to a hydraulic setup, but the lever feel was light and positive, and most importantly, the brakes offered pretty good power and control.

At the other end of the spectrum, however, were the mechanical brake calipers on the State Bicycle Company 6061 Black Label All-Road and the Scott Speedster 30. Both are single-piston designs with one pad that moves back and forth, while the one is stationary; essentially, the moving pad pushes on one side of the rotor until the other side of the rotor is pushed against the fixed pad.

Single-piston calipers can work well, as we saw on the bargain-priced Triban RC120. But even then, the design’s asymmetrical nature requires very careful setup. Ideally, the fixed pad should sit as close to the rotor as possible, which can take some time to get right.

Regardless of the caliper layout, mechanical brakes require more care to get the most performance out of them in general.

Remember what I said earlier about how efficiently hydraulic systems transfer force? Well, that isn’t the case with mechanical ones. You’ve got cable stretch to deal with, housing compression, friction as the cable slides through the housing, and even material flex in the caliper itself. All of that can (and often does) squander much of the effort you’re putting in at the lever. There was so much friction in the lines on our State test bike, for example, that nearly every tester commented about how you almost had to use all four of your fingers to generate decent stopping power — not good.

There are solutions to this, such as high-end compressionless brake housings that don’t squish as much under braking force, and sealed systems that are more resistant to contamination. But those rarely come stock on value-priced bikes, and they can be expensive to add aftermarket. The Yokozuna Reaction stuff is the best I’ve used by far, but a full kit is US$60, and that’s without labor.

We noticed a remarkable amount of variation in brake pad performance among the mechanical disc brakes at this year’s Field Test, too — certainly more than what we see with hydraulics. For example, the Promax ones on that Triban RC120 surprised us with decent initial bite and very good overall control. But the ones on the Scott Speedster were so lacking in friction that we initially wondered if something was wrong. They hardly worked at all until they got hot, and even then, they were still pretty bad.

Much like with the cable thing, there are solutions — namely, swapping pads. The total cost for the parts is about the same as high-end cables and housing, but they’re thankfully a lot easier to install so the labor cost should be lower.

There’s one other type of disc brake system I haven’t mentioned yet, and that’s a hybrid system that combines aspects of both hydraulic and mechanical systems. These use traditional cables and housing from the lever to the caliper, but then the caliper itself uses a self-contained hydraulic mechanism to move the pads to the rotor instead of the typical screw-type mechanism.

These are often viewed as offering the best of both worlds, combining the ease of service of cable-actuated systems with the power and control of fully hydraulic designs. As is often the case, the real world results aren’t quite so hyperbolic, but proven models like the TRP HY/RD and Yokozuna Motoko (which are also sold under the Juin Tech brand name) really do bridge the gap somewhat.

That said, they’re almost never found on stock bikes, and they weren’t included on any of our bikes at this year’s Field Test. They’re an interesting option if you’re looking to upgrade from a purely mechanical setup, but they’re also typically quite a bit more expensive — as much as US$300 for a full set — so that’s something to consider.

So which one is for you?

One of our biggest conclusions from this year’s Field Test is that hydraulic disc brakes really are just plain better than the other options: more power, more control, more consistency. And while they’re hardly immune to issues, past experience has demonstrated those issues are usually few and far between.

When it comes to mechanical brakes, the biggest problem is how much variability there is in their performance. Although they can work quite well — and will be more than ample for riders who don’t anticipate heavy-duty braking needs — that’s definitely not always the case, and not everyone will be sufficiently skilled to get the most performance out of them. And yeah, they’re usually heavier, but I’d argue the difference isn’t usually enough to matter a whole lot at this end of the price spectrum.

Overall, if you’re out shopping for a more value-priced bike, and all other things being equal, we’d recommend going hydraulic. They just work better, and the performance is more predictable between brands and models. Unless you regularly head out into parts unknown and need to repair something yourself in the field, or you’re the tinkering type who’s willing — and able — to put in the time and energy (and maybe cost) to get the most out of mechanical system, this one’s a no-brainer.