Jay Vine (Alpecin-Deceuninck) wins stage 8 of the 2022 Vuelta a España.

After winning stage 6 in thick mist, all Jay Vine was missing was photographic evidence, so he went out to get it on stage 8.

Jay Vine (Alpecin-Deceuninck) wins stage 8 of the 2022 Vuelta a España.

There’s something very special, perhaps strange, about Jay Vine, and it’s not that he earned a contract by playing e-sports during the pandemic. No, the now two-time Vuelta stage winner’s unique trait is that there is some sort of magnetic pulse that emits from his slender form, and which wreaks havoc on the weather and apparently all nearby audiovisual technology.

The 2020 Zwift Academy winner climbed to a maiden pro victory on stage 6 after attacking out of the rain-saturated GC group. It was a phenomenal first win for the Australian, but the mist was so thick that he was completely – I mean completely – invisible as he crossed the line.

Two days later, the Vuelta’s second summit finish offered another opportunity for the Alpecin-Deceuninck man who was lively in all the moves that punctuated the first phases of the stage. He had some serious company though, with fellow week-one stage winner Marc Soler (UAE Team Emirates), Thibaut Pinot (Groupama-FDJ), Mikel Landa (Bahrain Victorious), Rein Taaramäe (Intermarché-Wanty-Gobert Matériaux), Lucas Hamilton (BikeExchange-Jayco) and Alexey Lutsenko (Astana-Qazaqstan). Trek-Segafredo’s Mads Pedersen also made the move, and his singular goal of taking the intermediate sprint – positioned about 25 km from the finish – and the green jersey made him a valuable engine for the 10-strong breakaway.

With his competition in mind, not to mention the controlling efforts of Quick-Step Alpha Vinyl in the peloton, Vine went and hunted down maximum mountain points, winning atop every one of the six classified climbs and moving into the virtual KOM lead within an hour of the flag drop.

“At the start, literally on the first climb, I thought, ‘I don’t know if we’re going to be able to stay away, they seem to be chasing us pretty intently’, so I decided to definitely target the first couple of KOMs,” Vine said in his post-stage winner’s interview. “Then in the valley, we had a really good group. The FDJ guys had three in the move, and Quick-Step were just controlling, so from that point on I went, ‘Ok, if I can get the KOM points without too much of a struggle, I’ll go for them’, but yeah the stage was definitely still the main goal.”

Every time he accelerated for a crest, really he was putting the rest on notice, and evidently the strongest climber in the breakaway, the young Australian was ready to respond when Lutsenko attacked on the climb to the finish, the Cat.1 Colláu Fancuaya (10.3 km at 7.9%). The Astana-Qazaqstan rider seemed to fade fairly fast and Vine was able to read it in his rival’s body language, knowing this was his chance to go for it.

“Lutsenko did a starting move and I was sort of in the wheel so I decided to follow, and after he pulled off there was no indication that he was going to do a second attack or anything like that,” Vine explained of his attack with 6 km to go. “It was like a 25-minute effort from here, similar to what I did two days ago, and I decided to keep the pressure on. After about a minute and a half, I looked down and there was no wheel so I forced myself to get to that next hairpin, and after the hairpin I looked back and there was no one, so I kept going.”

He had about half a minute over lone chaser Marc Soler at the flamme rouge, fog obscuring the action in the last few kilometres of the first-category climb.

The clouds parted for Vine in the last 500 metres, a ray of sunlight picking out the new king of the mountains as he pedalled to his second pro victory, even more impressive than the first.

Vine smiled. He put a hand to his head in disbelief. Then he punched the air in celebration. The display of strength and climbing ability was no surprise, but win number two brought out a renewed confidence in the 26-year-old that amplified the burgeoning talent. And this time we all got to see it.

“It’s incredible. I think I just got so much more confidence after that first one, I’d got that monkey off my back,” he said. “It just felt so much more natural and riding in the group today all the pressure was off me. I had two goals and if one didn’t pay off I always had the KOM jersey to fall back on. So I had a lot more confidence in myself and I just enjoyed today, today was such a fun day.”

In the GC race, Quick-Step Alpha Vinyl effectively forced a stalemate until the final climb where attacks were inevitable from anyone hoping to test Remco Evenepoel.

Tao Geoghegan Hart (Ineos Grenadiers) was the first to make a move, getting rid of the race leader’s last remaining teammate but putting himself in a little trouble too. When TV pictures returned a few minutes later, Evenepoel was wearing a poker face on the front of the GC group which was down to just four: Enric Mas and Primož Roglič glued to the wheel and moving up to second and third, with Carlos Rodríguez (Ineos Grenadiers) the best of the rest in their shadow.

Evenepoel took his closest rivals to the line where he left them smarting with one last acceleration, but neither Mas nor Roglič lost any time. Simon Yates and the Ineos Grenadiers pair of Rodríguez and Geoghegan Hart were the only others who got away with a less than 30-second loss. The rest of the favourites let go of at least 50 seconds, Pavel Sivakov dropping out of the top 10 altogether and Richard Carapaz, who’d tried to get up the road early in the day, losing a further 3:50 and dropping to 25th overall. 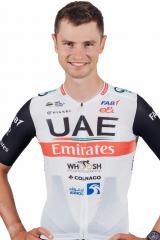