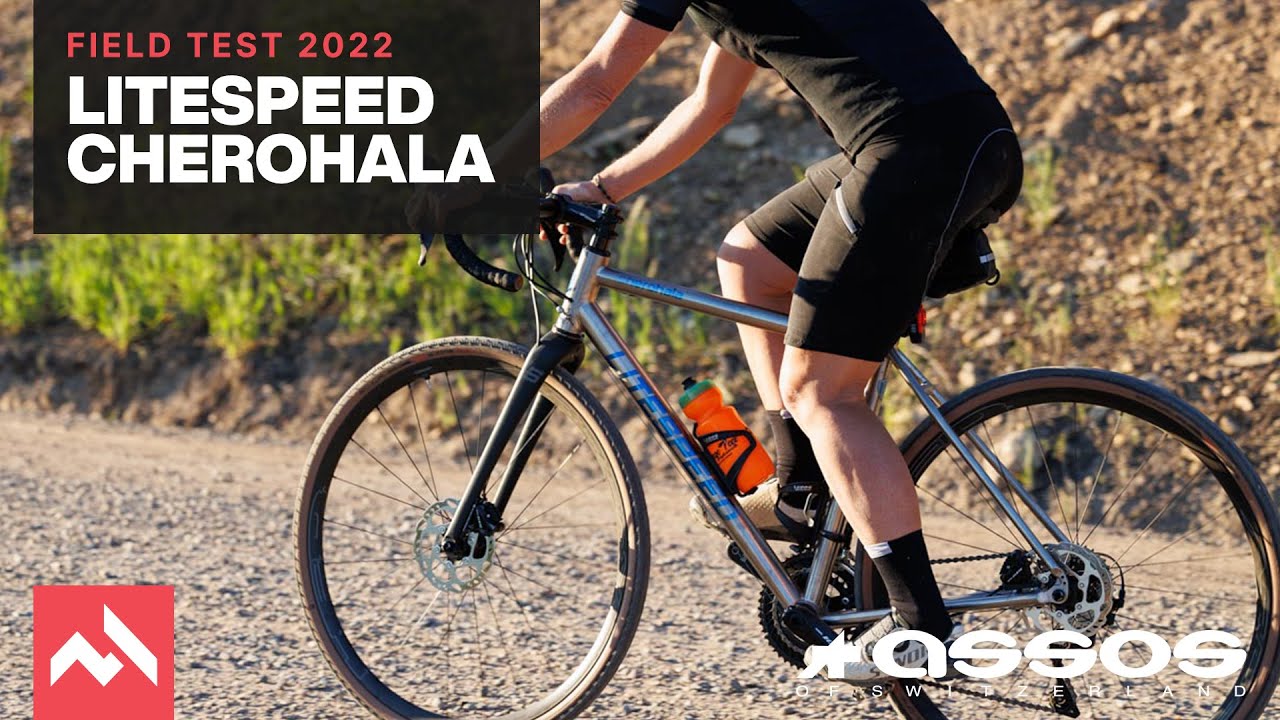 The feature-laden titanium frame is incredibly appealing on paper, and it turns out this is one book you really can judge by its cover.

Think a quality titanium road bike is out of your reach? Not if you’re shopping in the midrange category, and certainly not if you’ve taken a look at the Litespeed Cherohala. The Cherohala was the only titanium model we had at this year’s Field Test, and as one of the least expensive options for something US-made from a reputable manufacturer, we weren’t entirely sure what to expect. But to our surprise, the Cherohala not only managed to live up to the titanium hype, but it turned out to be just a flat-out excellent all-road bike in general.

The Litespeed Cherohala gets its name from the Cherohala Skyway, a lusciously scenic 69-km (43-mile) paved road that weaves its way amongst the mountains of North Carolina and Tennessee, crossing two national forests in the process. It’s a mecca for car and motorcycle enthusiasts, and it came at a cost of US$100 million.

As it turns out, the Cherohala Skyway is also a favorite ride of the folks at Litespeed, and the Cherohala they offer is a heck of a lot less expensive.

Litespeed designs the Cherohala to be a true all-road bike, meaning it’s primarily intended to be ridden on paved roads, but with room for 700×38 mm-wide knobbies, it has the frame clearance and handling manners to tackle moderate off-road situations.

The 3V/2.5Al titanium tubing is “globally sourced” (excluding Russian suppliers), and though it’s primarily straight-gauge stuff (as you’d expect for this price) with nominally round profiles throughout, there’s still a fair bit of manipulation going on. The down tube is subtly ovalized at the bottom bracket for better pedaling stiffness, for example, and the top tube is slightly squashed from end to end to boost front triangle torsional rigidity.

Chainstays and seatstays are constant-diameter, but artfully bent for more drivetrain and tire clearance, while the 44 mm-diameter head tube and PF30 bottom bracket shell are machined internally to shave some weight (a T47 threaded bottom bracket shell is an available upgrade). According to Litespeed, the seat tube is the only section of the frame that uses a completely straight and round tube with no wall thickness variation. Interestingly, Litespeed goes with an oversized dimension here and a 30.9 mm-diameter seatpost instead of a more common 27.2 mm one.

The compact dropouts are machined in-house from 6V/4Al titanium stock and include fender mounts, while the Asian-sourced full-carbon tapered fork includes fender mounts, too.

Cable routing is convertible between mechanical and electronic drivetrains. Cable-actuated setups are externally run, and there’s a pair of housing stops with integrated barrel adjusters that are mounted to the bottom of the head tube. For electronic groupsets, those housing stops can simply be removed and replaced with little plastic plugs; the wires themselves are routed internally (unless you’re running a wireless setup, of course). Either way, the rear brake hose is fully guided through the down tube with a welded-on titanium tube.

Claimed weight for a medium Cherohala frame is quite respectable at 1,467 g.

Geometry-wise, the Cherohala is an interesting mix. The stack and reach proportions make for a somewhat upright rider position, but the steering characteristics stick to the sporty end of things with trail figures of 60-67 mm, depending on size (with 700×32 mm tires). Bottom bracket drop is pretty average, ranging between 66 mm for the XL and 76 mm for the S, but tempering that responsive steering geometry are the lengthy 430 mm chainstays. Adding further length is the way Litespeed got to those trail figures, by combining relatively slack head tube angles (71-72°) with 50 mm fork rakes. As such, wheelbases are over a meter long for every size, with the XL maxing out at 1,057 mm.

If something in those figures doesn’t appeal to you, don’t fret; custom geometry is available for a modest upcharge.

We wanted to keep our Cherohala test sample at a reasonable total cost, so we outfitted it with a Shimano 105 mechanical groupset and FSA Gossamer aluminum finishing kit. We did upgrade the wheels to a set of HED Ardennes RA tubeless-compatible aluminum clinchers, though, which were wrapped with 32 mm-wide Panaracer GravelKing tubeless file treads. And because it’s a surprisingly modest upcharge, we also went with anodized logos instead of the stock etched finish or vinyl decals — because they look sweet.

You’ve perhaps heard or read all sorts of lofty platitudes about how magical titanium bikes are to ride, but the truth is that how the frame is designed is just as critical to its performance as what it’s made of.

But you know what? All of those seemingly impossible positive traits hold true in the case of the Cherohala.

The ride quality is simply brilliant, and quintessential titanium. It’s smooth and comfortable on poor road surfaces, with a nicely muted personality that mutes out road buzz entirely while still taking the sting out of nasty potholes — and that’s despite using an oversized 30.9 mm-diameter seatpost instead of a more flexible 27.2 mm one.

There’s enough flex and springiness to make the bike feel lively, but yet it’s also stiff and responsive when you put your foot on the gas. There’s lots of feedback coming up through the frame to tell you what’s going on at the tire contact patches, but never so much that it drains you over time. It feels lighter than the scale would suggest, and there’s just something electric about how the whole thing feels. What exactly is it about the Cherohala that makes it feel that way? Beats us, but whatever it is, the Cherohala’s got it.

“I’m a big fan of titanium bikes,” said VeloNews senior editor Betsy Welch, “and this one had that smooth, buttery ride quality that I love about Ti.”

Opinions were more mixed on the frame geometry, however.

When just casually cruising, that long wheelbase helps the Litespeed feel rock-solid and stable — just shut your brain off and pedal. However, things take a turn for the worse when you initiate a turn. Although the trail dimension is pretty normal, the way Litespeed got there — with a slack head tube angle and lots of fork rake — yields a lot of wheel flop as an unfortunate side effect. As a result, initiating a turn feels normal enough at first, but if you’re not on top of it, that initial movement can quickly transition into oversteer.

Put another way, it’s almost like the Cherohala wants to fall over into the turn as the front wheel flops to that side. It’s by no means dangerous, but it’s a quirk you need to be aware of in order to truly navigate the bike smoothly through a corner. We eventually got used to it, but never grew to like that characteristic.

As part of our testing, we also fitted all of the road bikes in this year’s Field Test with 700×35 mm Schwalbe G-One RS gravel tires to see how they would fare in more challenging off-road situations.

Not surprisingly, swapping to those larger tire casings improved the ride comfort of the Cherohala even further to yield a truly sublime glide over rough ground. That long wheelbase was also nice to have on loose surfaces, and the bigger tires tempered the wheel flop issue somewhat, too — and we didn’t even max out the 700×38 mm tire clearance.

Aside from that one handling quirk, all of our testers generally had a lot of good things to say about the Cherohala. Though it’s not necessarily exceptional in any one particular area, it’s very good just about everywhere that counts.

Electronic shifting gets all the attention these days, but the Shimano 105 mechanical groupset on our Litespeed Cherohala tester was a good reminder of how good cable-actuated transmissions can be.

Shifts were impeccably smooth and precise both front and rear, while either ambling along or smashing the pedals. You just push the appropriate lever and the chain goes where you want it to, each and every time. Lever action was light and snappy, too, and it was refreshingly satisfying to actually feel those levers move something at the other end.

Likely helping matters along here was the Cherohala’s well executed external cable routing. The housing paths are pleasantly free of tight kinks, instead featuring large-radius bends all around to minimize friction. Housing stops are well aligned so as not to produce any excess friction at the ferrules, too. And let’s not forget that over the long term, this traditional setup will be a cinch to service and maintain.

The hydraulic disc brakes also drew universal praise from our test crew with a well-defined contact point, gobs of power, and excellent control. And since both front and rear brake mounts seemed to be well in alignment, we never experienced any pad rub, either.

In general, Shimano 105 may not be the company’s lightest mechanical groupset, but from a functional standpoint, it’s certainly on par with the nicer stuff.

The wheels received plenty of positive comments, too. They’re decently wide at 21 mm internally, the hooked profile will be reassuring to many, the hubs rolled smoothly, and at least in our limited testing on- and off-road, they also seem to be built well. They’re also reasonably light at less than 1,600 g, and while they’re not ultra-stiff, their subtle flex pattern proved to be a nice complement to the Litespeed’s titanium frame.

We didn’t have any complaints with the Panaracer GravelKing tires, either. They’re pretty fast-rolling and offer excellent cornering grip, and while the file tread obviously isn’t designed for riding off-road, the tires handled packed dirt roads just fine.

The FSA Gossamer finishing kit was perfectly adequate, neither blowing anyone away nor leaving anyone overly disappointed. The bar shape is agreeable enough, and the stem held tight and looked reasonably premium. A bigger issue was the single-bolt seatpost, as the serrated cradle base didn’t offer as fine an angle adjustment as I would have liked. At least the WTB Volt saddle was well received by everyone.

In general, though, the stock parts get the job done with minimal complaints, and they make for a solid overall package.

Thumbs up all around

There’s a reason there’s so much hype surrounding titanium frames: when done right, they’re really, really good, and this Cherohala certainly falls into that category. It’s not cheap and yet it hardly feels like it’s overpriced, either. If anything, all of us felt the Cherohala actually offered pretty good value for the money, all things considered.

More information can be found at www.litespeed.com.