Meintjes is the second South African ever to win a Vuelta stage: "It’s something really special, I think it will really take some time to set in."

Louis Meintjes seems to have been at the pointy end of bike races for a long time, and yet his results display more top 10s than victories in his decade as a pro cyclist. That all changed on stage 9 of the Vuelta when he infiltrated the day’s breakaway and climbed to a career-defining victory on the violently steep Les Praeres climb.

The South African was launched onto the world stage by Doug Ryder’s then ProConti team MTN-Qhubeka in 2014, with whom he raced to tenth overall at the 2015 Vuelta. He then stepped up to WorldTour with Lampre-Merida, which helped him to consecutive eighth-place finishes at the Tour de France, perpetuating the promise of Grand Tour and stage racing potential.

However, the once white and/or yellow jersey hopeful steadily became pegged only as a solid minor placings contender, maybe a stage winner in the mountains. As new, younger and more all-round talents emerged, the focus was moving on from Meintjes who turned 30 earlier this year.

After a relatively anonymous three-year stint back with the team that gave him his start, he made the surprise move to Intermarché-Wanty-Gobert Matériaux in 2021, far from a general classification outfit. Even so, Meintjes was on track for a top-10 finish at the 2021 Vuelta before crashing out on stage 18, and he’s been rolling back the years this season.

Third at the Tour of Sicily this April proved his climbing form, and six weeks later he won the Giro dell’Appennino, his first victory since 2015. As the world’s attention turned to France, Meintjes continued to ride with or near the best, taking sixth at the Critérium du Dauphiné and eighth at the Tour de France, netting two top-10s including second on Alpe d’Huez.

And yet, he’s aware he’s no match for the Grand Tour winners of the modern era: climbing, crosswind-chopping, time trial machines. So at the Vuelta, he’s switching things up.

“The last few days in the mountain finishes I just was not quite fast enough to keep up with the GC guys,” Meintjes admitted. “If I don’t get the result that way, the best is to go in the breakaway and it worked out perfectly today, I was quite lucky. My team controlled it quite good in the start, and I tried one time and I picked the correct breakaway so that was good.”

Meintjes was one of nine who survived the frantic battle for the breakaway in the first 90 minutes of racing. Thymen Arensmen (DSM) had also made the move but was forced or persuaded to resign his ticket given his 3:18 deficit to the race leader, but Meintjes, 29th overall after stage 8, was allowed to stay. That said, his climbing ability made him a marked man.

“It was a quite hard day and also they made me do a bit more work, always closing the gap and accelerating,” he said. “I knew I was also spending more energy than a lot of guys so I was not sure I would have still the best legs.”

In the run-up to the finale, a 3.8-kilometre wall with an average grade of 13% and ramps over 20%, Samuele Battistella (Astana Qazaqstan) and Jimmy Janssens (Alpecin-Deceuninck) stole a gap over their fellow escapers. But experience was on Meintjes’s side and the South African paced himself back up to the leaders before going solo for the last 2.5 kilometres.

“I knew it was really hard and actually it didn’t matter if you follow the breakaway or not, it was just a time trial to the finish.” 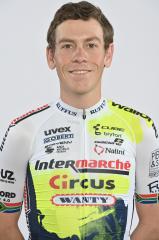