Juan Sebastián Molano (UAE Team Emirates) took a surprise victory on the final stage of the Vuelta a España, as Remco Evenepoel punched the air in the bunch behind, the last of three fresh-faced Grand Tour champions in 2022.

There was the usual leisurely run into town to start the afternoon, interrupted only by a brief attack from Rohan Dennis (Jumbo-Visma) until the Australian thought better of it. Then with little over 50 km to go, Alejandro Valverde was allowed off the front to enjoy the first town centre lap with only the adoring crowds for company.

Movistar’s day was not done when their elder statesman was regathered. With the UCI points system front of their minds, the Spanish outfit delivered Enric Mas to the intermediate sprint where he took maximum points, vaulting him up to third in the points classification, the last position which earns UCI points. Job done.

He wasn’t the only GC rider who was interested, though. After Thymen Arensman’s eleventh-hour rampage on stage 20, Carlos Rodríguez (Ineos Grenadiers) had slipped down the standings, but still had a tantalising one-second deficit to sixth overall. The 21-year-old and his team could not resist the temptation to snatch back some time in the bonus sprint, but it wasn’t to be thanks to the combined motivations of Mas and Arensman’s Team DSM.

With the sprint out of the way, there was a short flurry of attacks until Julius Johansen (Intermarché-Wanty-Gobert Matériaux) and Luke Plapp (Ineos Grenadiers) found a gap. The pair broke free with around 45 km to go and were kept on a pretty short leash, and the technicality of the circuit definitely worked more in their favour than that of the desperate peloton.

Johansen and Plapp must have dared to hope as their advantage held going into the last 3 km, but UAE Team Emirates and Alpecin-Deceuninck were able to put the final nail in the coffin of the Vuelta’s last breakaway, making the catch with 900 metres to go.

UAE Team Emirates seemed in complete control in the finishing straight, Marc Soler even playing a role early in the leadout. With Tim Merlier (Alpecin-Deceuninck) nowhere to be seen, Mads Pedersen (Trek-Segafredo) identified a good wheel, but even Pascal Ackermann wasn’t able to come out of his teammate’s slipstream, ultimately taking third in a UAE sandwich with the green jersey in the middle. For Molano, it’s a first WorldTour victory for the quietly prolific Colombian.

With Rodríguez’s last-minute attempt to climb the rankings neutralised, it was ‘as you were’ for the GC contenders, who just had to make it through the last 96.7 km of the race.

And so, Evenepoel sealed his first Grand Tour title in what will look, in hindsight, like an emphatic and dominant victory, if not silencing his doubters, then forcing them to eat many of their words.

Since taking over the red jersey on stage 6, he’s looked remarkably assured in his role as race leader, even during his jour sans when he lost time to his most dangerous rivals. And while a combination of COVID-19, disappointing form and heavy crashes had a devastating impact on the GC competition throughout the race, it’s hard to see where Evenepoel could have cracked in this final week even with a full complement of rivals. He ends the the Spanish Grand Tour, the first three-week race he’s completed, with a lead of more than two minutes.

Standing on either side of him in Madrid were Enric Mas and teenager Juan Ayuso, making the youngest GC podium since 1931. This victory also completes this year’s collection of first-time Grand Tour winners after Jai Hindley and Jonas Vingegaard’s wins earlier this season. 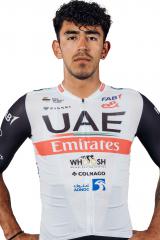