On a wet day in Wollongong, the Kazakh rider proved strongest from a late move.

In a rain-soaked 10-lap race around suburban Wollongong, Fedorov put in several attacks on his way to rainbow glory. With a six-rider breakaway up the road for much of the day, Fedorov put in a solo dig with a little over four laps to go in an attempt to bridge to the front. While he wouldn’t get there, a later attack would prove far more successful.

With just over a lap to go, roughly 19 km from the finish, Fedorov was in a group of three that bridged to the sole remaining rider in the breakaway: France’s Mathis Le Berre. Joining Fedorov was time trial silver medalist Alec Segaert (Belgium) and Mathias Vacek (Czech Republic). On the final lap, Le Berre was dropped, so too Segaert, leaving just Fedorov and Vacek out front.

With 4 km to go, the two leaders had 12 seconds over a chasing peloton that included Jumbo-Visma sprinter Olav Kooij (Netherlands). Ultimately, Fedorov and Vacek would have enough runway to contest the sprint, with Fedorov easily dispatching Vacek on the run to the line.

“There were two of us in the last lap and we worked well together,” Fedorov said in his press conference via an interpreter. “And with 300 metres to go I decided to go and sprint because I saw that it’s now or never and obviously the strongest won.“

Vacek held on for the silver medal, while Norway’s Søren Wærenskjold added to his time trial gold medal by winning the bunch sprint for bronze.

Fedorov said later that the significance of the win hadn’t sunk in yet.

“At the moment I do not feel anything besides general tiredness after the race, but it’s very great to be in my last year in the U23 category and to win the world championship title,” Fedorov said. “I think that tomorrow the feeling might come of being world champion.”

“The climb was difficult for me,” he said. “I’m not a real climber but I knew that if I got over the climb, I could make it to the finish. I tried a few times and then we got away [with] two over the top on the last climb, so I knew we could make it. I’m not a fast sprinter but I’m not slow either and the legs made the difference.

“I was in good shape because I did the Vuelta a España with the Astana Qazaqstan team. I came to Australia with a goal to try my best. My win is 10 years after [Alexey] Lutsenko won the under-23 title [for Kazakhstan] and I also remember watching [Vinokourov win the] London Olympic Games race.”

Like Kooij, Fedorov already races at the WorldTour level, having joined Astana Qazaqstan last season. He’s got big goals for the year ahead.

“For the next year. my aim is to ride another Grand Tour, as I did this this year, the Vuelta,” he said. “And of course, to win some professional races, maybe someone one-day Belgian Classics, something like that – the races that I’m very suitable for.” 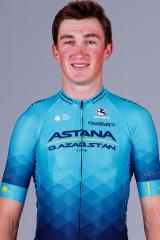